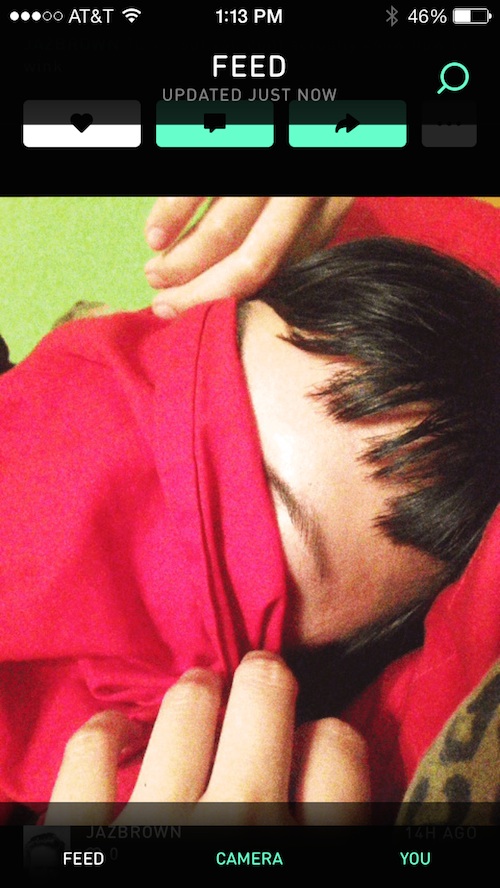 By now, most people have an Instagram or Vine account. Even if you don’t, you probably use Facebook or Twitter to share pictures with friends and family. Frankly, I’m getting bored with all of these sedentary images. I want my pictures to move.

PHHHOTO might be called the next-generation of photography-based social networking. Instead of plain, non-moving snapshots of your trip to the fair, you can create one-second animated GIFs to share with the world. We took the app for a test spin and have a review of PHHHOTO for you today…

The app has a classic black background with a neon font theme. It almost has a sci-fi feel to it. Your main feed features your uploads, as well as those of the users you follow. To add friends, you can either allow the app to access your contacts in order to automatically find people you know, or manually search for them after you’ve logged in.

Speaking of logging in, in order to use this service at all, you must verify your existence by registering your phone number with HYPERHYPER. You will then receive a four-digit code by text that you must enter when prompted. I contacted the dev team to find out why users must give a phone number instead of the traditional email address option.

It turns out that PHHHOTO has been around for a while as a photo booth that people could book for parties. At the time, the way you could have your moving picture sent to you was with your phone number. You could then receive the image through SMS where you could share it on your social media sites.

As for privacy issues, the dev team says it perfectly:

“I realize most people automatically think we want their personal info for some devilish reason – but we do not share, and we do not spam – we stand behind that promise 100%. It is just a way to link all of a user’s Phhhotos together in the app – whether from the photobooth or the iPhone app.”

Once you’ve created an account and find some friends to follow, you’ll be able to see what they add in your feed. Everything you add will show up in your feed as well.

You can switch between your feed, the in-app camera, and your profile. When you are ready to take a moving picture, switch to the camera. You can turn on the flash, add a grid, set a timer to get ready for the pose, and flip the view around to use the front-facing camera. The available features are listed at the top of the screen

After you’ve snapped a shot, add a filter and a caption and post it to your feed.

Under your profile, you’ll see your user avatar and all of the pictures you’ve added so far. You can also see how many friends you have, separated by whom you follow and who follows you, and the shots you’ve “liked.” There is a fourth section titled “Parties,” which has to do with those photo booth style parties mentioned above.

Once you’ve received your four-digit code and created an account, the first thing you will be asked to do is take a selfie. This will be your profile avatar. If you decide later to change the avatar, go to your profile page, touch and hold the picture, and wait for the camera to prompt you to shoot a new one.

Next, you will be able to add friends and start creating your own moving pictures. Tap the camera to take a photo. Choose a subject, set the frame and turn on the flash if you need to, and tap the shutter button. The app will take five quick shots within a one-second period of time and stitch them together in an animated GIF.

Once the moving picture is created, you can add a black-and-white filter or keep the color one. Tap the “Next” button in the upper right corner to continue. You can then add a caption, which appears as a comment next to your account name. When you are ready, tap the “Post” button to add it to your feed.

After you’ve uploaded your own moving pictures, check out what your friends have done. Some of the animated images are pretty clever. I realize that your friends might not be using PHHHOTO yet since it just launched a few days ago. However, it is very easy to invite them just by allowing PHHHOTO access to your contacts. Before you know it, everyone will be using it. You don’t want to be left out, do you?

Taking moving pictures is almost addicting. I had a lot of fun testing different things I could do with this app. My friends can also be pretty creative and I like seeing what they came up with.

I also like that there are already hundreds of people using this app. The company did a good job getting people on board. New social networking services can be difficult at first because it is hard to see the benefit when your friends are not using it yet. With PHHHOTO, there are already so many people using it that it doesn’t feel brand new at all (I mean that in a good way).

I know that giving out a phone number is going to be a turn off for some of you. It would be nice if, in the future, they changed that method, or at least offered the option to use an email address instead.

It is very difficult to simply discover new content. All of your images are public, but the only way to search for new content is by typing in a user name. I’d like to see a discovery section where users can browse new or trending uploads.

PHHHOTO is free. The only thing you will spend on it is time. Once you get started, it is hard to stop making animated pictures. This social networking service is in its infancy stages, but already has hundreds of users. If it keeps progressing, I can see this becoming the next big thing.

I can totally see this as being a new wave of social networking. It follows the same basic structure as other social photography apps, but uses animated pictures instead of stationary ones. If you aren’t worried about giving out your phone number (how is it any different than giving out your email address, these days?) then you should jump on board so you can be one of the first to claim you were into PHHHOTO before everyone else was. Download it in the App Store today.

My first thought is Instagram because it is the biggest photo-sharing site around right now. However, it is a bit more like Vine because the pictures are animated.