As expected, Apple is out with its financial report for Q3 2014 this afternoon. In a press release issued just a few moments ago, the company announced that it sold 35.2 million iPhones, 13.2 million iPads, and pulled in $37.4 billion in revenue during the three month period.

Apple beat its own guidance, and met projections on just about everything but iPad numbers. It would seem that the problems continue with the popular tablet line, as sales came in more than 1 million units less than expected. We have a full breakdown of the numbers below…

Here are some comments from CEO Tim Cook and CFO Luca Maestri from the release:

“Our record June quarter revenue was fueled by strong sales of iPhone and Mac and the continued growth of revenue from the Apple ecosystem, driving our highest EPS growth rate in seven quarters,” said Tim Cook, Apple’s CEO. “We are incredibly excited about the upcoming releases of iOS 8 and OS X Yosemite, as well as other new products and services that we can’t wait to introduce.”

“We generated $10.3 billion in cash flow from operations and returned over $8 billion in cash to shareholders through dividends and share repurchases during the June quarter,” said Luca Maestri, Apple’s CFO. “We have now taken action on over $74 billion of our $130 billion capital return program with six quarters remaining to its completion.” 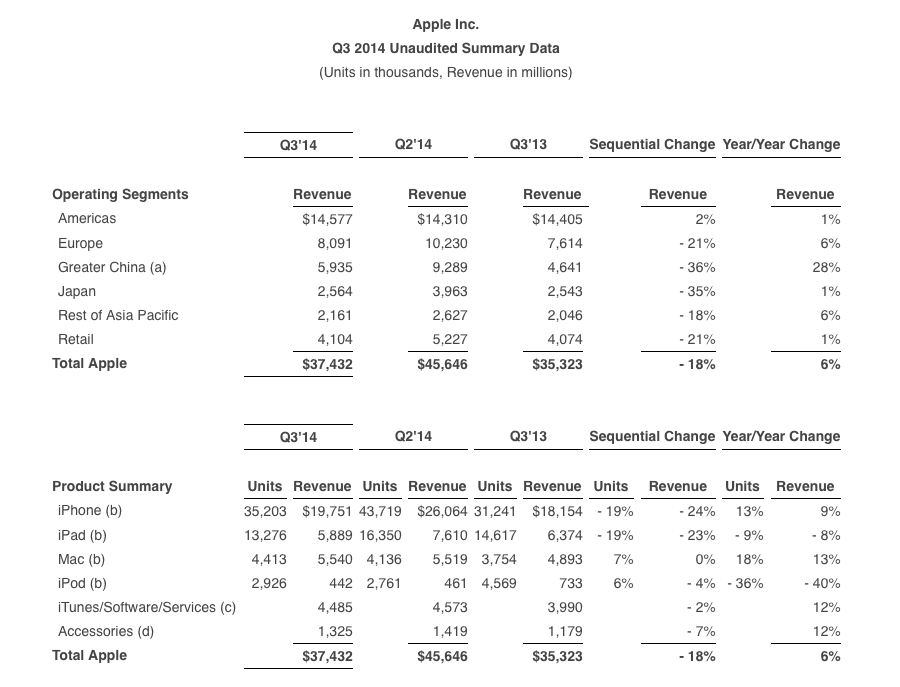 The third quarter is typically the most lackluster for Apple, due to the nature of its iPhone and iPad release cycles. The company is expected to announce new smartphones in mid-September, which means it should become available at the tail-end of the fourth quarter.

Apple’s earnings call will start in just a few minutes. If you’d like, you can listen to a live webcast of the call via Apple’s online investors portal. Or, as usual, you can continue to check back with iDB later this afternoon for more commentary and major announcements.