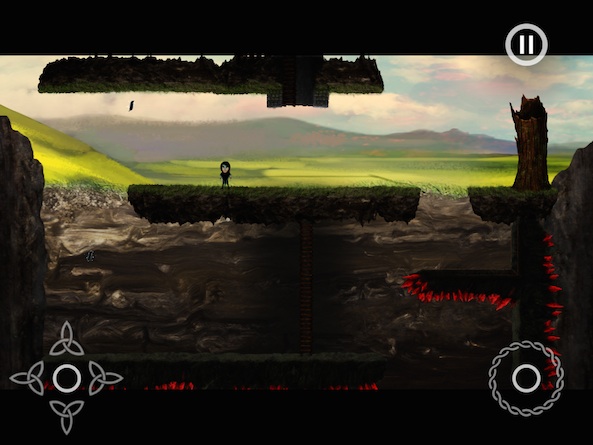 Platform games, often dubbed platformers, have always had a special place in my heart, so when I heard about Munin in our last App Recap, I downloaded it immediately and have been addicted ever since.

Munin is a 2D platform game for iPad based on Norse mythology in which a raven named Munin has been transformed into a human. In order to become a raven again, Munin must collect all of her feathers from various places in the beautifully dark world of Yggdrasil. If this seems like a storyline that would interest you, read on for my full Munin review…

Munin is a very dark game that is filled with tunnels, caves, and other slightly depressing landscapes. However, all of these landscapes have been beautifully illustrated, and look like what I’d expect to see in an old book of myths.

Munin is a platform game, and the platforms that Munin jumps between are made out of natural materials like moss covered wood and rock. The textures used to create these platforms are equally as beautiful as the illustrations, and really add a sense of realism to the game. Additionally, the platforms are placed in front of the stationary illustrations, making it look as if you’re playing Munin inside of a storybook.

Adding to the dark storybook theme, Munin’s soundtrack is very fitting. The soundtrack is very minimal and fades in and out of the game — almost sending you into a trance as you focus on speeding through all of Munin’s many levels.

Tapping on said platforms will rotate them 90-degrees, allowing you to rearrange the levels to acquire Munin’s feathers without falling off the platforms. To move Munin between platforms, you must use the app’s directional pad and jump key located towards the bottom of the screen. 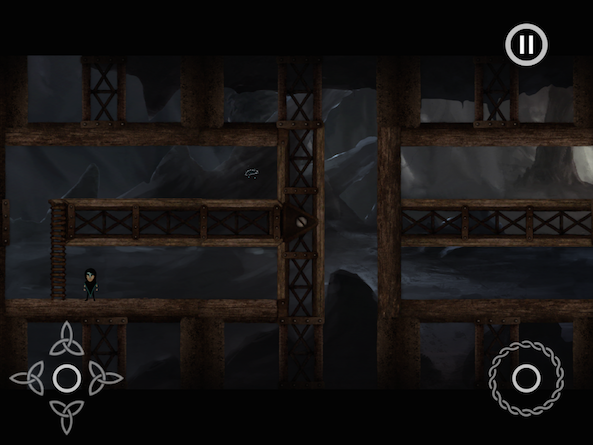 When starting to play, you’re greeted with a small background story on the character Munin and given a quick level one tutorial. After progressing through the first level, you’re thrown right into normal gameplay.

Munin’s gameplay is excellently simple with the goal of each level being the same: to acquire each feather scattered throughout the map in order to make Munin a raven again. However, actually acquiring these feathers can be quite the challenge, requiring players to alter the map and run and jump between platforms.

Altering the map in Munin gives this platformer a very cool, puzzle-like feel. Platforms must be arranged constantly throughout the game to keep Munin from falling and to keep the flow of feathers steady. Even though the first few levels start off relatively quick, they get progressively harder with feather placement getting more and more awkward challenging you to strategically move your platforms. It’s easy to get stumped at certain points in the game, and as of now there is no way to get hints or help in-game.

Munin is made up of four different worlds that you progress through as you get further into the game. Each world has its own characteristics that you must use to complete the level. For instance, one world requires you to use water to your advantage while another has you use gravity to lock and unlock moving platforms.

The gameplay and controls are smooth while Munin’s landscapes and backgrounds are absolutely gorgeous. I’m a huge fan of how the game’s maps are all unique, getting exponentially tougher as you progress throughout the story. Finally, tapping to alter the environment around Munin is a seriously cool addition, giving the app’s perfect harmony between platformer and puzzle.

I feel that some of the game’s graphics can be a bit more polished, namely the feathers scattered around the map and Munin herself. For some reason they seem a little out of place when compared with the rest of the map. I’d also like to see an in-game help or hint feature added to Munin in the future.

Munin costs $2.99, which is a pretty average price for an iPad game. The first time around, Munin will be a ton of fun and likely pay off for most players due to the fact that the game has 81 unique levels. However, gamers looking for replay value will not find it in Munin as the game does not feature different difficulties or a timer, making for a lack of reason to play the game a second time around.

Munin is hands-down one of the most entertaining iPad games I’ve played in quite some time, even though the graphics can be a bit spotty at times. The controls are great, the story is intriguing, and gameplay is fun, so all in all, I can recommend Munin to anyone who is into platformers, 2D games, mythology, or all of the above. Download Munin in the App Store for $2.99.

Leo’s Fortune is another platfomer for iOS where you play as a small green puff named Leopold and are tasked with hunting down thieves who stole the puff’s gold.

What do you think of Munin?