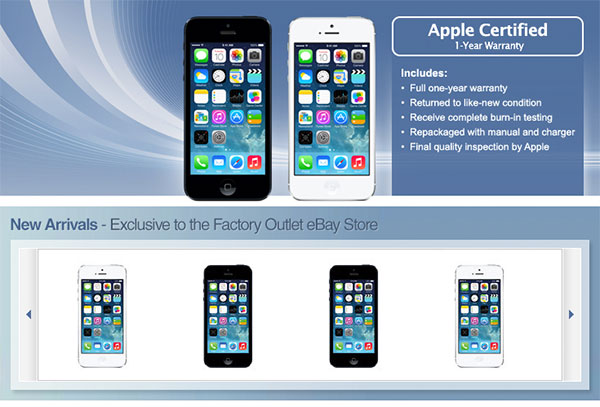 Back in November 2012, a secret mini-store popped up on eBay with officially certified, little-used Apple products, similar to those found on the company’s own refurbished section at the Online Apple Store.

However, since selling through the initial allotment of good-as-new gear the Apple Certified Refurbished Products section on eBay has seen little activity in terms of deals on iPhones, iPad, MacBooks and other products.

Today, Apple reportedly launched a brand new secret store – again on eBay, but this time around offering certified and unlocked GSM iPhone 5 units, with prices starting at $449 with free shipping…

These prices compare very favorably to Apple’s $549 price for the baseline iPhone 5c model with sixteen gigabytes of storage.

The store, dubbed the “Factory Outlet eBay Store” and available here (via AppleInsider), is devoid of Apple branding though the layout appears to be a carbon-copy of Apple’s previous store-within-a-store on eBay.

The products seem to be factory-refurbished by Apple itself, having received complete burn-in testing. Additionally, the iPhone refurbs on eBay come with a brand new battery and the company’s standard 1-year warranty.

The phones have been professionally repackaged with a “final quality inspection performed by Apple.”

For what it’s worth, Apple’s first eBay store – which sold refurbished iPads at $100 less than on Apple’s own online store – was part of a three-month pilot program that the company chose not to renew, as per AppleInsider.