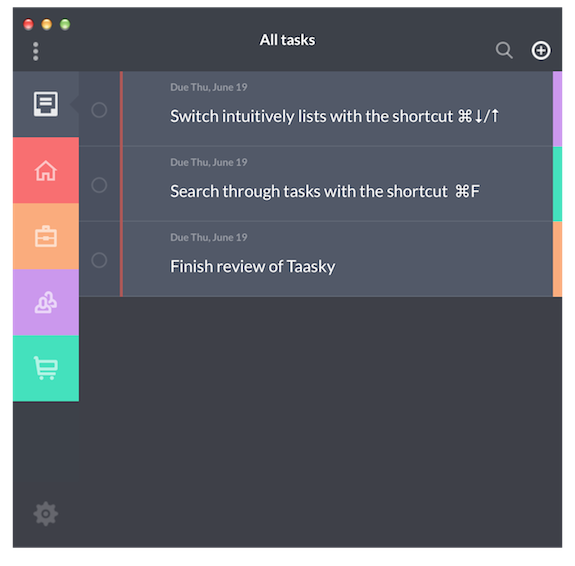 Taasky for Mac is one of the latest entrants in a highly competitive market of apps for task management, to-do lists and getting things done. How it aims to stand out of the pack is with a beautiful and sleek design, but how does it stack up functionally? Taasky can be best described as simple, both from a design and usage perspective. After giving the app a test drive on my Mac for a few days, here are my first impressions…

Taasky is the embodiment of Apple design cues that have emerged over the past few years, particularly flatness and minimalism. The app looks as if it was created for OS X Yosemite, with translucent menus and a visually appealing design. Taasky has a mainly dark grey user interface, contrasted with a brightly colored icon and tabs and buttons for categories.

While most Mac apps on OS X Mavericks have a stock chrome appearance with slightly rounded edges, Taasky is square and looks like an iOS app blown up on the desktop. As such, it is no surprise that the iPhone version of the app has virtually an identical design. In case you are wondering, Taasky for iOS is $1.99 on the App Store for iPhone. There is no iPad version. 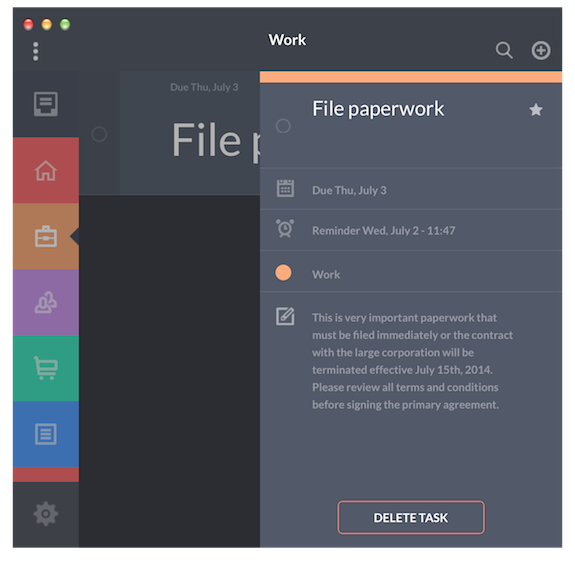 The layout of Taasky is easy to understand and navigate. There are four tabs on the left, a list of color-coded tasks on the right, new task and search buttons in the top-right menu, and a settings button in the bottom-left corner. The settings are laid out in a clear and concise manner with glyphs, although it is not immediately obvious that you can scroll through them.

The typography is large enough to read and contrasts well with the dark interface. I cannot quite pinpoint the exact font that is used, but it appears to be something similar to Fedra Sans. My only quip about Taasky’s design is that the search menu should be more opaque, because it makes the app look somewhat cluttered at its current transparency level.

To create a task, simply tap on the plus sign in the top-right menu. A semi-transparent text field will appear where you can type a new task, alongside a calendar for assigning the task a due date and reminder time. There are four default color-coded lists to file tasks in: home, work, friends, shopping list. You can also create your own custom lists. 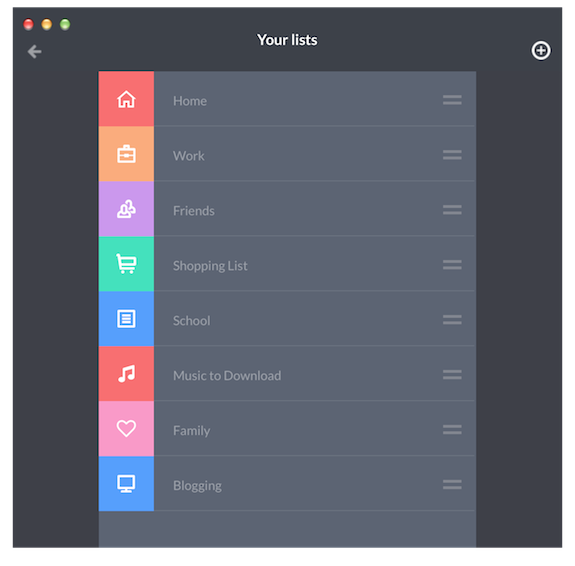 Tasks are organized in reverse chronological order based on their due date, meaning that tasks that are due in the shortest amount of time appear at the top. There is also a star for pinning a task to the top, regardless of its due date. When you have completed a task, simply click the checkmark to the left and it will be moved to the bottom of the list.

If you click on a task, a menu opens with a summary of its due date, reminder date and time, which list it is categorized under and notes. There is also a button for deleting the task. If those are the only features you are looking for in a to-do list app, then Taasky will fit your needs great. But if you’re looking for advanced functionality, you’ll probably want to look elsewhere. 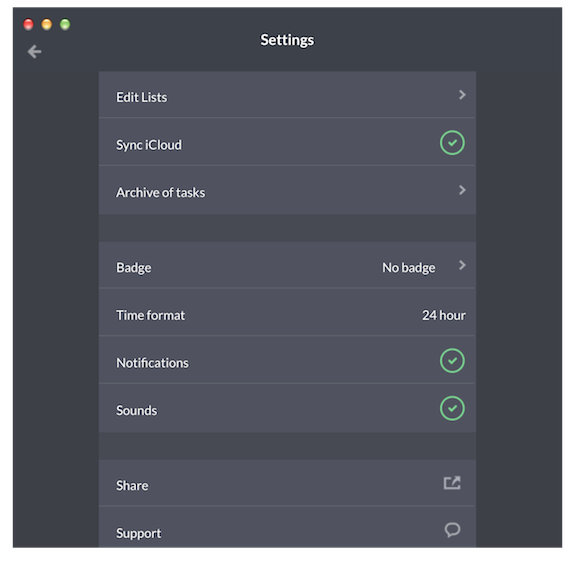 Taasky has a variety of shortcuts for various actions: ⌘N creates a new task, ⌘L creates a new list, ⌘F searches through tasks, ⌘M minimizes the program, ⌘↓/↑ switches lists and more. These shortcuts allow me to keep Taasky open on my second display and create tasks without interrupting the workflow on my main screen. We’re trying to increase our productivity, after all.

In the settings for Taasky, you can enable iCloud synchronization to keep all of your tasks in sync between the Mac and iPhone versions of the app. There is also options for managing lists, using a 12 hour or 24 hour time format, enabling notifications and sounds, and sharing the app through Twitter, Facebook, AirDrop, Messages, Email or Reading List.

Taasky for Mac is an affordable task management app at $3.99 on the Mac App Store, but you are paying for what you get. For just four dollars, you are not getting the advanced functionality as OmniFocus 2 or Firetask, both $39.99. It’s also worth considering that Wunderlist 2 and Todoist are two free options that have an impressive number of features.