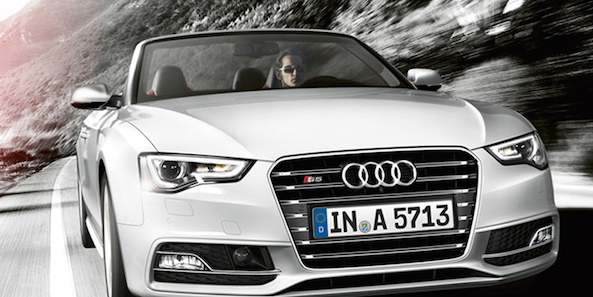 Yesterday, luxury car maker Audi announced it’ll be integrating both Apple’s CarPlay and Google’s Android Auto automotive software platforms into the Multimedia Interface for its premium lineup of vehicles. Today, the German car maker shared additional details pertaining to both the feature and the roll-out timeframe.

Coming to 2015 models in Europe and to 2016 vehicles in North America, CarPlay will integrate with Audi’s built-in controls and allow drivers to access apps through the car’s native controls and switch between CarPlay and Audi’s Multimedia Interface with a touch of a button…

Audi issued a media release this morning outlining its implementation of CarPlay on 2015 and 2016 vehicles. The system will make it easy to access full CarPlay features using the Audi MMI touchpad, voice and dial inputs to easily activate Siri.

In CarPlay-equipped models, Audi motorists will simply connect their iPhone to begin using their apps through the car’s native controls. Drivers also have the option to easily switch from the CarPlay view and the Audi infotainment functions as desired.

And, separating the vehicle-related functions from the infotainment features secures user data against unauthorized access because Audi’s implementation requires drivers to give express consent for the use of data generated in the vehicle.

According to Scott Keogh, President, Audi of America, Audi and Apple engineers worked closely together to integrate CarPlay seamlessly with the Audi MMI system interfaces.

That’s a smart approach, if you ask me.

Rather than put all eggs in one basket, car makers like Audi and others are increasingly opting to keep their options open so they’re adopting a multi-platform approach to ensure drivers can use both iOS and Android devices in their car, with easy switching between the Apple/Google software platform and the vehicle’s stock in-dash solution.

Here’s Audi’s MMI in action (not related to CarPlay):

CarPlay launch partners include Volvo, Ferrari, Honda, Hyundai and Mercedes-Benz, with many more can vendors pledging to back the initiative down the road such as BMW, Chevrolet, Nissan, Ford, Kia, Toyota and Mitsubishi Motors.

And if you’d rather add CarPlay to your older model, official aftermarket CarPlay solutions from such names as Alpine and Pioneer will be available later in the summer.

The feature is compatible with the iPhone 5/5s/5c running iOS 7.1 or later and is activated by connecting your device to a CarPlay-enabled car’s in-dash system.

Audi will begin offering CarPlay in new models scheduled to arrive in Europe next year and in U.S. showrooms by 2016.