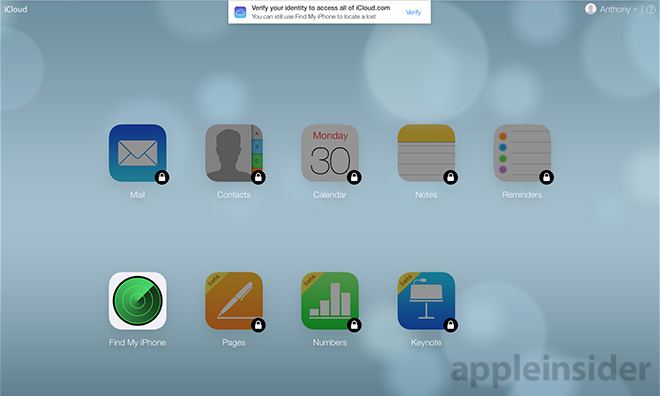 Apple has apparently begun rolling out a two-step verification system to its iCloud web portal this afternoon. The new system adds an additional layer of security to an area that offers access to web versions of stock Mac and iOS apps like Mail, Contacts and Calendar.

It’s not clear if Apple is simply testing the feature with some users or plans to eventually roll it out to all iCloud.com subscribers, but it seems not everyone has access to it yet. Those who do see it, though, say it requires users to enter a special code to access their apps…

AppleInsider was first to report the change:

With the new implementation, shown in the screenshot above, Apple is expanding its two-step authentication security feature beyond Apple ID management and iCloud-connected features to the iCloud.com Web app suite. Prior to the change, iCloud.com was accessible via a simple password. The feature was first spotted by reader Stephan.

AppleInsider was able to confirm the new iCloud security feature is indeed Apple’s normal two-factor authentication service, though it is unclear if the feature is in testing or nearing rollout. Certain Apple ID accounts we tested required the second verification, while though others did not.

First introduced back in March of 2013, Apple’s two-step verification system is an optional security feature for Apple ID accounts that requires the account holder to verify their identity, using one of their devices, before they can make account changes or iTunes purchases.

As for iCloud.com, users with two-factor authentication enabled are now required to verify their identity to access all web apps except ‘Find My iPhone.’ The site can, however, ‘Remember’ your browser, meaning you would only have to enter the verification code one time.

Are you seeing the two-step verification option in your iCloud web portal ? If not, you either haven’t enabled two-factor authentication for your Apple ID, or Apple hasn’t activated it for your user group yet. Let us know what you’re seeing down in the comment section below.