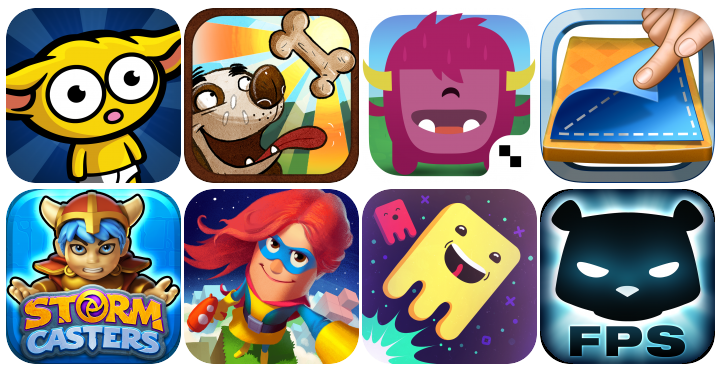 Thursday is always expected to be a busier day on the App Store each week, as several developers release new apps for iPhone and iPad. But when I awoke this morning, I was pretty shell-shocked to realize just how many new high-quality games are now available. While I would normally resort to throwing most of these new titles into App Recap, our daily app roundup, the sheer number of awesome new games merits a separate post this afternoon.

Aerena: Clash of Champions, Supernauts and Monsters Ate My Birthday Cake are among the new games in this massive App Store refresh, which is something that usually only happens around the holidays. We’ve provided game trailers for some of the exciting new games ahead, and we’ll be highlighting even more of the releases in App Recap later tonight. So grab your iPhone or iPad and check out a dozen must-have games ahead…

Assemble a team of champions and face-off against your friends or opponents in this turn-based tactical combat game, set in the unique Ætherpunk world with powerful masters and champions. Aerena: Clash of Champions is free on the App Store for iPhone and iPad.

Supernauts is a social building game in which you join thousands of other players in contests to rebuild Earth, solve puzzles and get creative. The game has a highly social multiplayer environment and simple touchscreen controls. Supernauts is free on the App Store for iPhone and iPad.

Enter a beautiful Origami world and bring it to life in Paperama, a unique puzzle game with several levels to complete. Fold paper sheets to create origami figures, working as accurately as possible to fit the form. Paperama is free on the App Store for iPhone and iPad.

Across The Table Hockey

Get it on arcade-style hockey action in this same-screen, two-player game that combines air hockey and table hockey into one. Imagine table hockey with the added speed and freedom of air hockey. Across The Table Hockey is 99 cents on the App Store for iPad.

Journey through an adventure in an ancient and forgotten dungeon, conquering the mysteries below. The action-packed dungeon adventure game features collectable rare Battle Cards, blasting of enemies, explosive elemental powers and more. Storm Casters is $1.99 on the App Store for iPhone and iPad.

Take control at the turning point of the battle for North Africa in this World War II turn-based strategy and history desert warfare game. Command tanks, recon units, flak guns and more. Desert Fox: The Battle of El Alamein is $9.99 on the App Store for iPhone and iPad.

Farting Felix is a genre-bending arcade game with a loveable little hero that goes on a big adventure. Join Felix as he runs, jumps and farts on an epic quest to collect Magic Stardust Balls from across the world. The humorous Farting Felix is $1.99 on the App Store for iPhone.

Match and build your own kingdom in Puzzle Tale, a new game that combines the simulation and match-three puzzle genres. In the game, you get lands jam-packed with resources to help you make the kingdom thrive. Puzzle Tale is free on the App Store for iPhone and iPad.

Try out this handcrafted game that is all about catching jellies, with bombs, clocks and electroshock. The fast-paced game involves catching as many jellies as possible in 60 seconds, with power-ups available to boost your score and time. Jellies! is $1.99 on the App Store for iPhone and iPad.

With over a dozen games to choose from above, there should be something that fits the needs of every iPhone and iPad gamer, whether you’re a fan of action-packed adventure or match-three puzzlers. The game trailer videos above were sourced from TouchArcade. Check out App Recap later tonight for more new, updated and on sale apps.