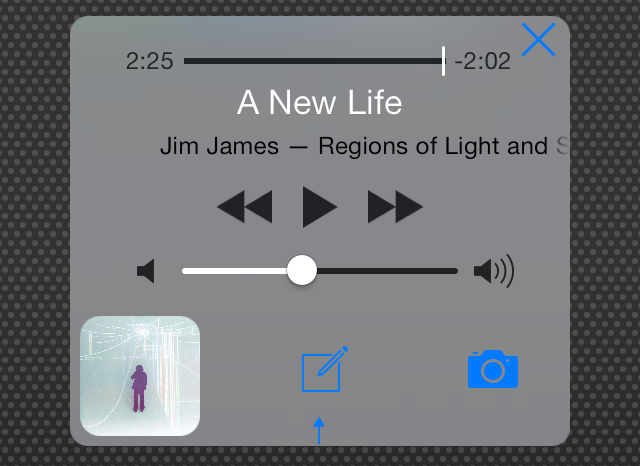 Volume+ is a new jailbreak tweak that infuses the volume heads up display that appears when adjusting your device’s volume with new features and shortcuts. It’s used to better equip you with handy controls while listening to music from the stock Music app or other music playing applications.

If you’ve been keeping a keen eye on Cydia over the last few years, you’ll know that it’s not the first volume HUD altering jailbreak tweak, and it probably won’t be the last. Unfortunately, it falls into the lower tier of similar tweaks, because its buggy and suffers from some poor design choices. Have a look at our video walkthrough to see what I mean.

Once you install Volume+ there are no options to configure. To test it out, you’ll need to open up the stock Music app and start playing a song. You’ll next need to navigate back to the Home screen and invoke the volume HUD by pressing one of the volume buttons.

After invoking the volume HUD, the changes are readily apparent. Volume+ adds volume and time scrubbers, transport controls, album title, song, and artist text displays to the volume HUD. There’s also a button at the bottom of the volume HUD interface that allows you to access additional shortcut controls.

The shortcut controls don’t have a lot to do with listening to music, and consist of shortcuts for composing new text messages and taking photos. This is where Volume+ kind of lost me. Not only is the button used to access these additional controls poorly designed, but the shortcuts feel misplaced, and some—like the text messaging shortcut—caused my device to crash.

With all of that in mind, I recommend saving the $0.99 asked by the developer of Volume+, and looking elsewhere. Like I stated, there are tons of volume HUD altering tweaks already available on Cydia, so if you’re interested in modifying it in some way, you should search Cydia.

What do you think of Volume+? Have you been able to try it?