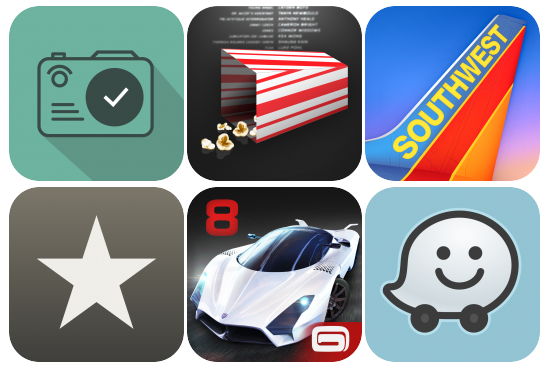 Yesterday was an eventful day on the App Store, with a massive Halfbrick Studios game sale and several important updates. Wednesday appears to be almost just as action packed, headlined by the release of a new Powerpuff Girls game and a couple of great discounts. We’ve covered the most important developments in App Recap, a daily column that promotes the best new, updated and discounted apps for iPhone and iPad. We’ve got a selection of 10 apps to help get you through the week…

Camera+ has released a new iPhone photography app called MagiCam, based on a simple premise: snap a photo, get one-tap perfection by applying one of nine moods to it and share the results with friends. This app doesn’t seem to differentiate itself too much from other photo filtering apps, but it can be yours for 99 cents on the App Store for iPhone.

The reason for Halfbrick Studios games having gone free could be related to the release of Birzzle Fever, a colorful match-three arcade game with lightning-paced bird popping extravaganza. Compete against friends, level up your superbirds, unlock new items, complete challenging missions and more in Birzzle Fever, free on the App Store for iPad.

Waze, one of the largest community-based traffic and navigation apps, was bumped to version 3.8.0 today to allow users to find more friends by adding contacts, send and receive friend requests, keep in touch with friends from profiles, send locations easier, share your drive and more. Waze is free on the App Store, and is universal for iPhone and iPad.

One of the best arcade racing game series for iOS in Asphalt 8: Airborne just got even better, with an update to version 1.4.0 that adds new cars, removes the rental fee for events and an extra tank booster for evening the playing field between new and veteran racers. Asphalt 8: Airborne is free on the App Store, and is universal for iPhone and iPad.

The popular RSS reader Reeder 2 has been bumped to version 2.2.1 with a new “sort by unread count” option for subscription sorting. There are also bug fixes pertaining to in-app browser links, the article viewer showing wrong articles, Pinboard login issues and crashing during OPML importing. Reeder 2 is $4.99 on the App Store for iPhone and iPad.

Clumsy Ninja has been updated with a new soccer theme that is fitting with the World Cup going on in Brazil. Now, players can try soccer ball training with the ninja in goal, practise ninja moves on an inflatable player, play with a brand new Brazilian Ball, get past the wooden defenders and more. Clumsy Ninja is free on the App Store for iPhone and iPad.

If you’ve ever gone to the movies and asked yourself if there is anything that follows the credits, look no further than Anything After. The app will quickly tell you if the movie you are watching has a post-credits scene, called a “stinger,” right on your iPhone. Anything After is currently free on the App Store, discounted from its regular $1.99 price tag. It even supports the iPad.

Rounding off this edition of App Recap is Photo Reminders, discounted from $1.99 to 99 cents. The app combines voice memos, photos and text to provide you with visual reminders, both for yourself and your friends or colleagues. Photo Reminders is 99 cents on the App Store for iPhone and iPad, but it is unclear if it is for a limited time or on a permanent basis.

As someone that grew up while the Powerpuff Girls was playing on Cartoon Network, it is definitely nostalgic to see a new game on the App Store for the series. In case you didn’t know, there are actually plans in place for the cartoon to return to TV in 2016. It is unknown if the original creator Craig McCracken will play any role in the reboot of the series. If we missed any apps, let us know in the comments below.