While there are several third-party apps that get the job done, I’ve never found Reddit to offer a solid mobile experience on its own terms. The company does not have a mobile optimized version of its website for Safari on iPhone, it does not provide an official app in the App Store and it does not deliver push notifications on iOS devices. But, things are about to get better. While Reddit is working on iOS and Android apps, the jailbreak community has made up for the lack of Reddit push notifications. Take a look…

iOS developer Julian Weiss and Phillip Tennen have finally updated Orangered, a jailbreak tweak that we covered for iOS 6 almost a year ago, with iOS 7 support. Orangered is an extension that delivers native Reddit push notifications on iPhone, iPad and iPod touch for the following third-party apps: Alien Blue and Alien Blue for iPad, narwhal, Aliens, amrc, Redditor, BaconReader, Reddito, Karma, Redd, Upvote, Flippit, MyReddit, Mars, OJ and OJ Free, and Karma Train. Cake and Reddme will be supported upon release, and you can email the developers if you would like another client added. 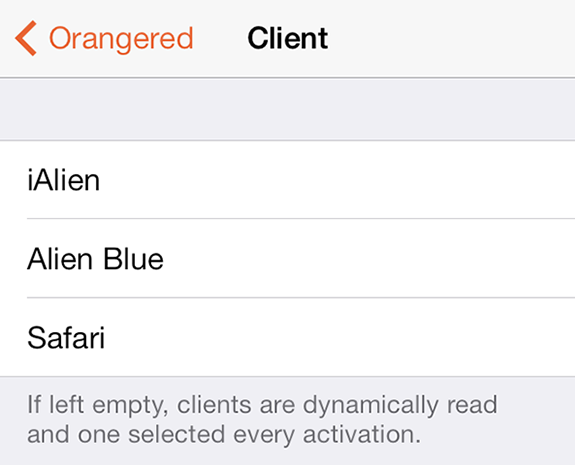 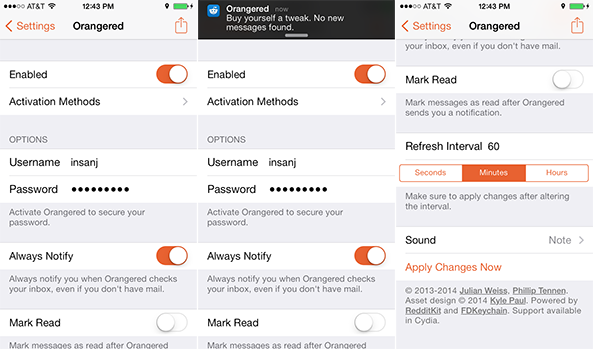 To enable the tweak, simply tap on the Orangered menu in Settings and toggle it on. Then, sign into your Reddit account with your username and password. I experienced difficulties signing into my account the first few times, and finally got it to work after using all lowercase letters to sign in. I would assume this is a bug, and I have let Weiss know about it. If it is in fact a bug, I know that Weiss is one of the better developers in the jailbreaking community that should follow up with an update.

I find myself procrastinating on Reddit a lot more than I should, so Orangered is a useful jailbreak tweak to me. It does what it is intended to well, which is keeping you on top of all of your Reddit comment replies and other things hitting your inbox. I put my word behind the iOS 6 version last year, and I recommend this updated version as well. Just remember that Reddit is working on its own app, which will likely have push notifications built in.

Orangered7 is 99 cents on the Cydia Store for iPhone and iPad.