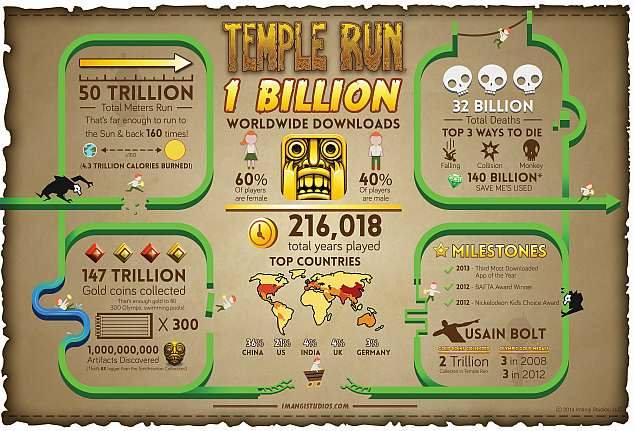 Raleigh, North Carolina-based gaming company Imangi Studios announced this week that its hit game Temple Run has crossed one billion downloads. The total is the combination of both the first and second releases of the endless runner.

Imangi notes in the press release that players have collectively spent over 216,018 years playing its Temple Run titles, which are available on iOS, Android and Windows Phone. They’ve also played 32 billion games, and run 50 trillion meters…

Here’s more from the release:

“Having Temple Run reach the one billion downloads mark is a milestone we couldn’t have imagined when we first started out,” said Keith Shepherd, co-founder of Imangi Studios. “We’re incredibly grateful to all the Temple Run players and our wonderful team. We look forward to continuing to grow the Temple Run franchise, as well as creating additional innovative games.”

Believe it or not, Imangi Studios began as a husband-and-wife team working out of their apartment in 2008. They created Temple Run in 2011, and the franchise now has its own apparel, plush toys and arcade games, among other licensing deals.

Both of the Temple Run games are available for free in the App Store, and offer various in-app purchases. Imangi has also partnered with Disney on two occasions to create tie-in Temple Run titles for the movies Brave and Oz the Great and Powerful.