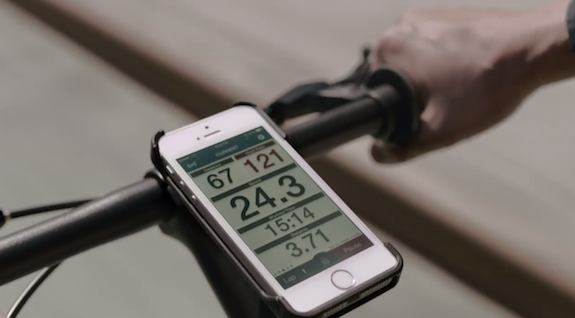 Apple has just uploaded a new TV ad called “Strength” to its YouTube channel, centered upon the various health and fitness accessories for the iPhone 5s. The one-minute spot debuted just a few hours ago on national television, during the first period of the Stanley Cup Finals on NBC between the Los Angeles Kings and New York Rangers. The upbeat commercial is backed by a song called “Chicken Fat” by Robert Preston, released in 1961 to get schoolchildren to do more daily exercise…

I like the direction that Apple has taken with this new ad. It effectively shows off how useful the iPhone 5s can be for working out, training and other health and fitness activities, while maintaining an upbeat tempo. It sure beats the ads featuring Apple Geniuses that aired during the Summer Olympics a few years ago, some of which were actually borderline condescending instead of humorous.

Matthew Panzarino of TechCrunch was first to report on the TV ad before it aired, spotting the Misfit Shine, Zepp Golf sensor, Wahoo bike sensor and Nike+ among the myriad of health and fitness apps and accessories. Notably absent is the oft-rumored iWatch, which Apple still has yet to unveil. The timing of this commercial is not coincidental, airing just two days after Apple launched its brand new Health app and HealthKit platform at its WWDC keynote.

Just a few hours ago, we reported that Apple is increasingly turning to its own in-house team for TV advertising because of a faltering relationship with longtime ad agency TBWA\Chiat\Day. Media Arts Lab, a division of TBWA, is still working on ad campaigns for the iPhone, however, meaning that it more than likely created this new spot. Apple has seen its Ad Metrix consumer score rise from 548 in 2013 to 564 so far this year.

Let us know what you think of the ad below.