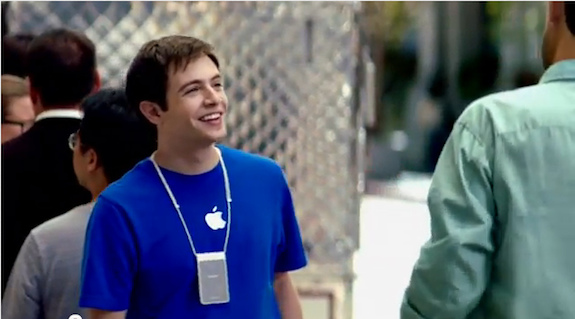 Apple is moving away from its longtime ad agency TBWA\Chiat\Day and creating more of its television advertisements from within, according to Bloomberg. The report, which cites sources with knowledge on the matter, claims that Apple has an in-house creative team consisting of at least two former employees that the company hired away from Media Arts Lab, a division of TBWA that works exclusively for the iPhone maker.

In an email that he sent to Apple CEO Tim Cook, which was revealed as part of the company’s legal battle with Samsung, Schiller said that he did not believe its ads created in partnership with TBWA had been effective enough at combating the Samsung marketing that depicts Apple customers as fanboys and cultish. “If we need to do this, we should get going,” Cook replied.

Apple has a long history with TBWA\Chiat\Day. Prior to being acquired by TBWA Worldwide in 1995, Chiat\Day created the iconic “1984” television ad for Macintosh shown during the Superbowl. That spot is widely regarded as one of the best advertisements ever, even though it was only aired twice on television. But, more recently, that relationship appears to be strained.

The shift to more in-house campaigns shows that Apple, grappling with slower demand after years of surging growth, is seeking a fresh approach to regain advertising as one of its key competitive advantages. A rift between Apple and TBWA\Chiat\Day, which worked together on the company’s Orwellian Super Bowl ad in 1984, once would have been unthinkable, said Regis McKenna, a technology marketing consultant who introduced agency founder Jay Chiat to Steve Jobs in the early 1980s.

Apple’s in-house creative team is led by Tyler Whisnand, formerly of Portland-based Wieden+Kennedy before joining Media Arts Lab. Other team members include Bill Davenport, also from Wieden+Kennedy, and music director David Taylor. The rift between Apple and TBWA is said to be widening, especially because the former is poaching talent from the latter. “Traditionally, that’s just a no-no,” said John Boiler, CEO of 72andSunny, the ad agency for Samsung. “It’s an indication of some seriously broken trust.”

Despite the tension, Media Arts Lab is still working on current iPhone TV spots and other ads for Apple. But now, the agency is reportedly competing head-to-head with Apple’s internal team on campaigns. The in-house efforts appear to be working, as ad-monitoring company Ad Metrix shows that Apple’s advertising score based on a survey of consumers has risen from a low of 548 in 2013 to 564 so far this year.

A few years ago, Apple released a series of highly criticized commercials during the Summer Olympics in London. The TV spots, centered upon Apple Geniuses, were not found to be as humorous as the company hoped. Instead, they failed to impress viewers and were taken off air within the week. At the time, TBWA said that the ads were only intended to be run for a short amount of time, but many suggested otherwise.

What do you think of Apple’s recent TV ads?