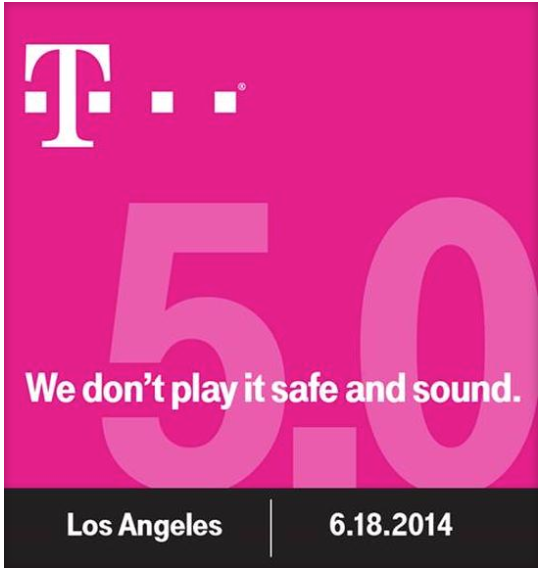 Somewhere during the craziness of Apple confirming the Beats acquisition deal yesterday, T-Mobile announced that it will be hosting a media event next month. The carrier sent out invitations for an Uncarrier 5.0 event, to be held in Los Angeles on June 18.

The invite, posted above, reads ‘we don’t play it safe and sound,’ but offers few clues on what T-Mobile is going to announce. In previous ‘Uncarrier’ events, however, the company has addressed various parts of the wireless business that most annoy consumers…

CNET has more on the Uncarrier initiative:

Uncarrier 5.0 will mark the latest in a campaign that has allowed T-Mobile to roar back to not just simply customer growth, but also growth that actually outstripped the rest of the industry last quarter. Legere previously told CNET that the Uncarrier moves, which have ranged from the elimination of contracts to buying out the early termination fees of customers coming from rivals, are meant to be permanent changes to the carrier’s offering.

T-Mobile has been very active this year, announcing a new $40 budget plan with low data allotment, and offering 1GB of free data to tablet customers. It’s also kickstarted another new trend in the wireless industry of paying off the ETF fees for new customers.

And all of these moves aren’t going unnoticed. In addition to rattling the cages of AT&T and Verizon, it’s being reported that Sprint has taken a strong liking to T-Mobile and is considering an acquisition. The buyout deal could be announced as early as this summer.

As for the Uncarrier 5.0 event, be sure to check back with us on June 18 for full coverage.