Sticking to its accelerated releases schedule for operating system upgrades which now calls for one major OS X release each year, Apple’s software teams have now began work on what would become the fourth major update to OS X Mavericks.

Simultaneously, its main group continues work on OS X 10.10, which will be previewed at next Monday’s WWDC alongside iOS 8 and other “exciting” goodies.

You can apply the beta by choosing Software Update from the Apple menu or download it standalone through Apple’s Mac Dev Center. The delta installer comes in at 440.33 megabytes. The full combo installer is a 903.33MB download. 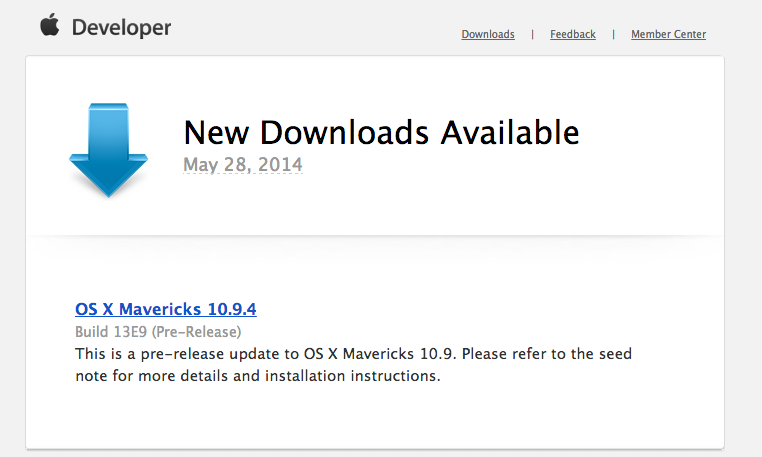 Seed notes make no mention of specific new features at this point, but I’ll update the article when/if I dig up something noteworthy. Given that this is the fourth major release and that Mavericks is now halfway through its lifecycle, 10.9.4 should be mostly about bug fixes and stability improvements.

I hope it fixes the annoying issue where Wi-Fi would disconnect after each wakeup. I’m also tracking issues with the overall reliability of Wi-Fi connections, especially when connecting to a Wi-Fi Personal Hotspot on my iPad Air.

Moreover, Mac Pro owners are complaining about inability to use more than two displays at a time after installing 10.9.3 so hopefully 10.9.4 will fix that, too.