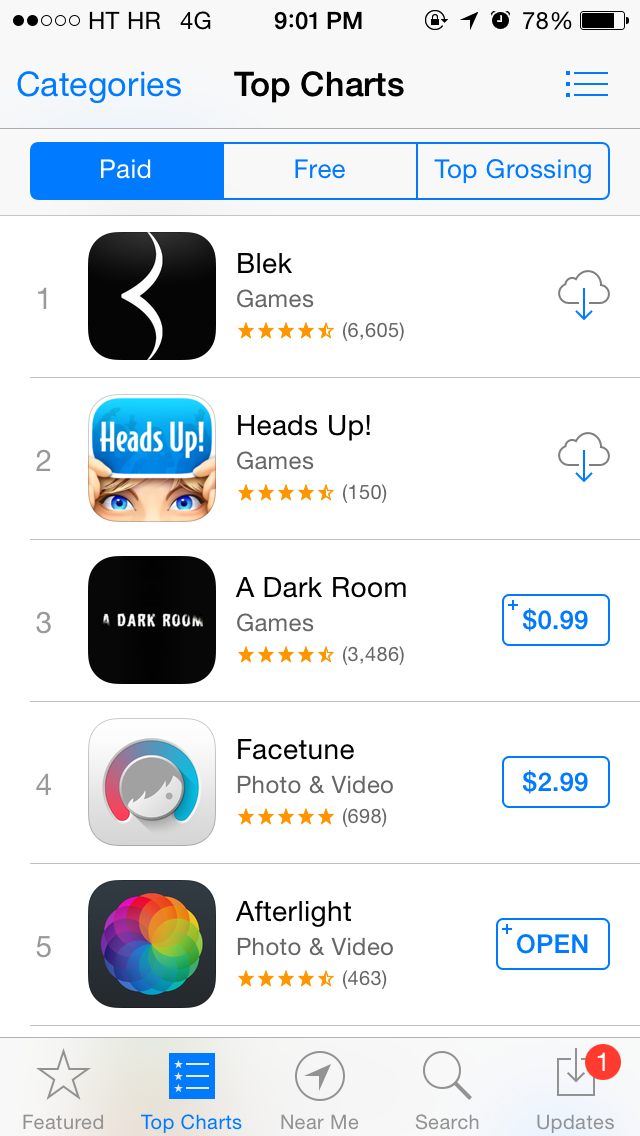 TechCrunch has spotted an interesting change under the popular Top Charts section in the App Store. The popular section now displays only half as much ranked apps as before.

Whereas previously you were able to scroll through the top 300 apps listed across Paid, Free and Top Grossing categories on the iPhone (or Top 1,500 on the iPad), Top Charts now shows only 150 results.

It’s a small but interesting change that shows Apple is still figuring out how to best surface noteworthy and trending apps among the more than million items it now carries in the App Store….

That means that half the applications which previously counted on being ranked here for discovery purposes are gone from sight, are have to be found via search or category listings instead.

The change appears to have gone into effect starting around May 23rd, before the Memorial Day holiday weekend here in the U.S.

She notes that the change is only affecting the App Store on iPhones, iPod touches and iPads. Top Charts inside the App Store section of desktop iTunes works as before, showing the Top 200 apps.

An update added to the article soon after explains that Apple is making these changes largely for performance reasons, “because it takes to long to load up the Top 300 on iPhone and the Top 1,500 on iPad”.

Additionally, Apple has apparently realized that only a fraction of its users would scroll down past the Top 150.

Taking a step back and looking at the app space as a whole, there is some consolidation going on in the app analytics community. Earlier today, mobile analytics firm App Annie announced it’s just snapped up rival Distimo.

The deal will help develop “the most advanced platform for analyzing the mobile app ecosystem,” according to App Annie CEO Bertrand Schmitt.

MarketWatch notes that the combined company now has 270,000 registered business users and tracks more than 600,000 apps, including “90 percent of the top 100 app publishers by revenue.”