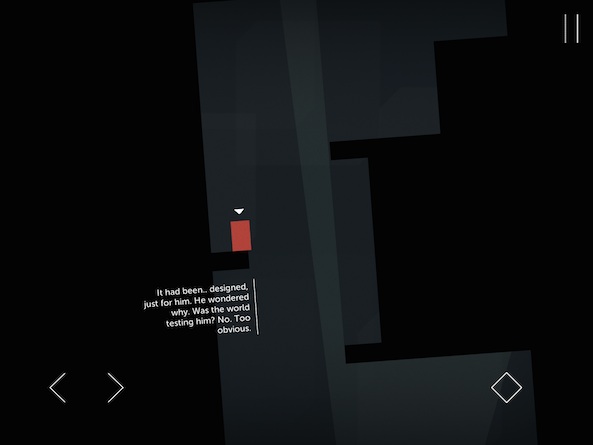 It’s interesting to see trends unfold right before your eyes. No, minimalist platform games are not new. However, their popularity has grown significantly in the past few months. The games are oftentimes thought provoking while offering a decent bit of fun.

Thomas Was Alone is a fascinating platformer that uses a minimalistic design but combines it with the complex narrative of a group of coding errors that have a mind of their own. Check out our game review of Thomas Was Alone below…

As I mentioned above, the game’s design is minimalistic. The elements are all based on simple geometric shapes. Squares, rectangles, and triangles make up both platforms and characters alike. The only additions to the flat landscape are the moving shadows that bring the world to life.

Players control a group of shapes, mostly rectangles and squares, which have very distinguishing personalities. Each shape brings a different useful ability to the adventure. They also have shortcomings, which makes the need to work together all the more important.

Along the way, players learn about the lives of the rogue group of sentient game elements through the use of verbal and text-based narration. You will discover which shape has a jealous streak, which is full of naive wonderment, and which shape thinks she’s a super hero.

Players control each shape using left and right arrows and a jump button. You can’t control all characters at a time, but you can switch between them by tapping their respective color on either side of the screen. Most of the time, you will need one shape to perform a certain action and another to perform a different one. The group must work together to make it out of the level or they will be stuck there forever. 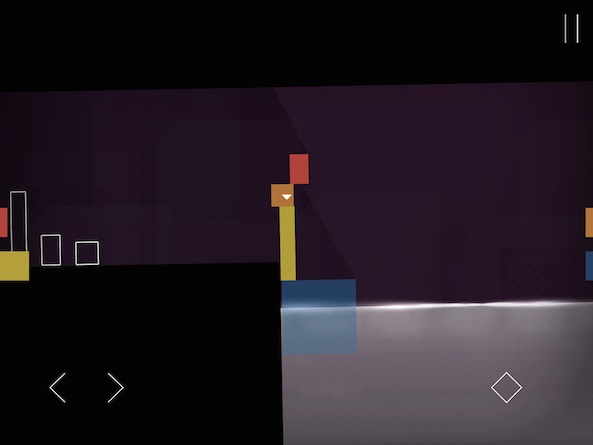 The goal of each level is to get all of your characters from their starting position to the end portal. All shapes must be in the designated spot to trigger the exit. The journey of Thomas and his new friends is the point of this story-driven game.

In the beginning, players control Thomas, who realizes his existence and looks forward to the adventure that is before him. His longing for companionship is soon satiated when he meets Chris, who doesn’t like him very much, and John, who is a bit narcissistic. Thomas will also eventually meet Claire, Laura, James, Sara, and a few others. Each character brings a new element to the gameplay.

Thomas is what can best be described as average. He isn’t tall, but he isn’t short. He can jump pretty well, but wouldn’t break any world records. Chris is very short and can’t jump worth a lick. However, he can fit into tiny spaces that Thomas can’t. Players use Thomas to help Chris to jump up to higher platforms and use Chris to slip through low platforms and release mechanisms to unlock doors. They may not want to admit it, but they need each other.

John is very tall and can jump to great heights. He is the perfect height to help Thomas get up on tall platforms, but is too tall for Chris. Together, Thomas and John can create a series of steps that Chris can climb. John doesn’t seem to need anybody’s help, but decides to stick with the other two because it makes him feel important. It doesn’t take long for John to realize that, without the others, he would be stuck on many levels.

You will often be faced with the need to switch from Thomas to Chris or John (or any of the others, depending on the level you are on). To do so, tap the color on the left or right side of the screen associated with the character you would like to use. When you tap it, that color will jut outward, reminding you of whom you’ve got control.

Thomas, Chris, and John go on a platform adventure of epic proportion. John will jump to high places and trigger unlocking mechanisms that are unreachable to the other two. Thomas will be by Chris’ side, helping him up to platforms that are too high.

You’ll also meet Claire, who can float, Laura, who can be used as a bouncing platform, James, who “falls” upward, Sarah, who can double-jump, and a few other characters that will reveal themselves as the game goes on. 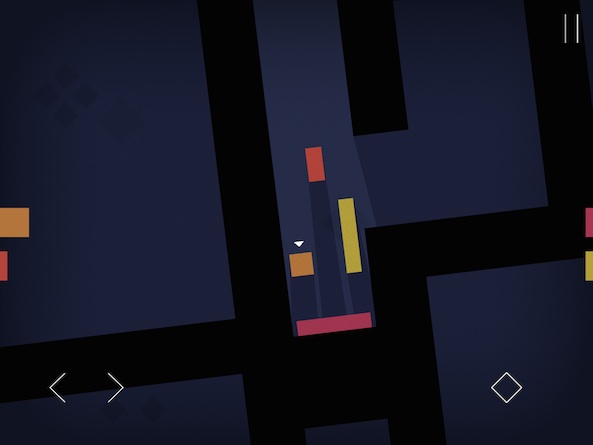 The game plays very smooth. The simple left and right arrow keys and jump button are very responsive and you can quickly switch between characters by tapping your thumb on whichever color you want to use.

I love the story that unfolds as the characters are introduced. Without the narrative, this would still be fun, but unraveling the tale of the group of coding glitches makes it a great game.

The joy of this game comes at a hefty price. I’d love to say it is worth the sticker price, but it is hard to. If this were a PC game, I’d say it is reasonable, but the App Store has a bad habit of under-pricing content and we’ve all gotten used to paying next to nothing for big games on iOS.

Thomas Was Alone costs $8.99. Like I said above, that is a bit steep. Don’t forget however, this game is from an indie developer and features high-quality graphics and game mechanics. The story is narrated by Danny Wallace of Assassins Creed fame. The replay value is medium. The game can be played over and over again, but nothing new happens.

I’m not going to lie. I find the high price to be a deterrent in fully recommending this game to everyone. It is a great title and very fun. The graphics and design are unique and interesting. The story is engrossing and worth spending time with. If you have a few extra dollars to spare, this is where your money should go. Keep in mind that this is an indie game that probably took its creator years to complete. Isn’t your nine bucks worth a few hours of his life? This game is available exclusively on the iPad. Download it in the App Store today.

Sometimes You Die is another minimalist style platform game with a story. Although its not a platform game, continue?9876543210 breaks the fourth wall of video games.

Have you played Thomas Was Alone already? What do you think of it?