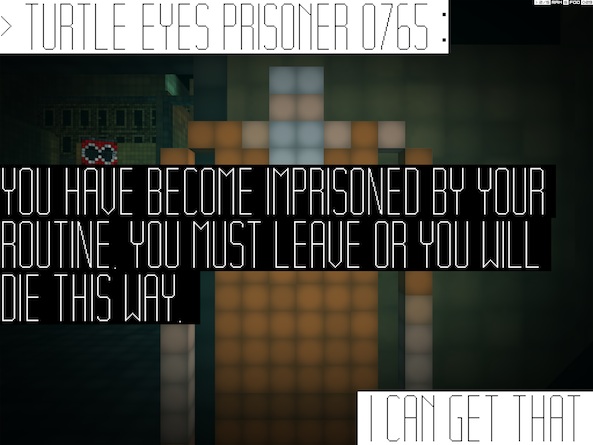 There is that moment, just before your game ends, when the world stops for a fraction of a second and you realize that all of your hard work and sore thumbs are about to be lost forever.

continue?9876543210 is a cerebral adventure game that explores the idea of what happens to your character after it dies. In this game, hitting the “continue” button doesn’t take you back to the point where you left off. Instead, you are wandering through limbo, trying to find a way back to life…

This game mixes three-dimensional graphics with retro pixel animation. Although it looks nothing like Minecraft, that game is the best I can liken it to. The graphics are decidedly 3-D, but the characters, buildings, and landscapes are boxy and heavy on pixel design.

Players use a virtual joystick and attack button to move and interact. During mini games, a jump button appears. But, while playing the main game, players can’t jump to a higher platform or over obstacles. Their feet remain firmly on the ground.

There are six, randomly generated levels, each with a different task and varying time limits. On one level, players must unlock five doors within three minutes. On another, players must chase down five scarecrows in two minutes.

Because the game is cerebral, it leaves the plot and goal open to interpretation. Players will inevitably die. Thus is life. The point is to explore, contemplate, and prepare for the end by interacting with their surroundings. 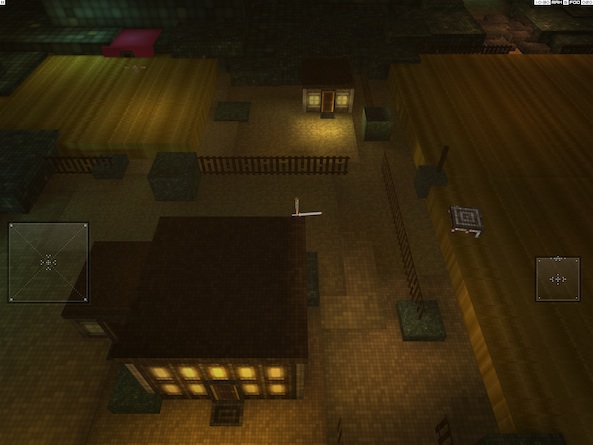 The opening sequence is not one to be missed. Even if you are antsy to get the game started, be sure to sit through the intro. It is beautifully executed and sets the mood for the entire adventure.

Once the cinematic is over, the action begins. Players are assigned one of six randomly generated characters. They are difficult to tell apart since they are so heavily pixelated. However, there is no difference in their abilities, so what the character looks like is not important.

Players wander around the first level, speaking with other non-player characters (NPC) and picking up in-game money (called “Foo”). When they find the exit, they can run the next program, which sends them to their first official adventure.

The goal of each level is slightly different. However, the main goal for all is the same. Players must build shelters and use Lightning before time runs out and the garbage collector comes.

The garbage collector is the code remover for dead video game characters. If you do not achieve your goal in time, the code remover will strike down your environment, rendering it unplayable and your character will fall into oblivion.

While in the game, players must speak to NPCs in order to learn more about the environment around them. This information can be useful in unlocking doors and building structures. For example, in one room, players must answer a question about where someone lives. If you don’t know the answer, you will lose one of your structures. To find out where the person lives, ask residents of the environment. Eventually, one of the NPCs will tell you. Then, go back to the room and correctly answer the question. A correct answer will produce a new structure.

Players are able to build structures by entering doors. These doors will appear when you either buy one from an NPC, or win one in a battle. When a door is open, enter it to try to build a shelter. In some cases, you will have to answer questions. In other cases, you can use a prayer to build a structure.

This game is very vague and does not have a clear user guide. Some goals are self-evident. However, others require you to track down an NPC that will show you a help menu. It is O.K. to mess up because your character will always die in the end anyway. What you do with your time before the end is what matters.

After a few rounds of trial and errors, you will begin to understand the point and be able to make better decisions about what to do next. Time is of the essence in this game, so hesitating for too long could spell your demise. 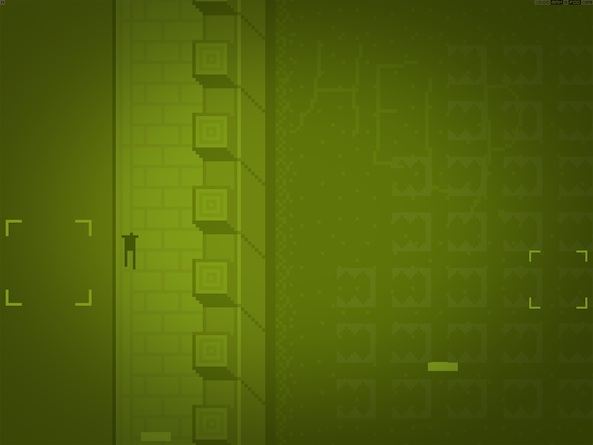 While pretending to be a basic adventure game, this unique title draws players in with a strange and beautiful story. The goal is less important than the journey that leads you there. It is a very interesting twist on a traditional game mechanic.

I especially like the soundtrack. The atmospheric music helps set the mood and relates a calm emotion to players.

The game’s controls are very awkward. I first tested this game on my iPhone and immediately decided that the controls were too small and that must be why I was having a hard time with them. I switched to my iPad and discovered the same ill-mannered controls. It is very difficult to move your character in the right direction. Plus, there are times when the joystick will just stop working for a second. The controls need a bit of work. It is already vague and confusing. Adding awkward controls makes it frustrating.

continue?9876543210 costs $3.99, which is a reasonable price for a title with this kind of unique game mechanics. It has a very high replay value since levels and characters spawn randomly. You never know what environment you will end up in next.

If you have any interest in games with cerebral themes, like Limbo and Nihilumbra, this game is right up your alley. The controls are awkward, but don’t let that scare you away from playing. The game is less about the goal and more about the process of getting there. It is available for the iPhone, iPad, and iPod touch. Download it in the App Store today.

In addition to the above-mentioned cerebral games, this has been compared to Superbrothers: Sword and Sorcery, “but weirder.”