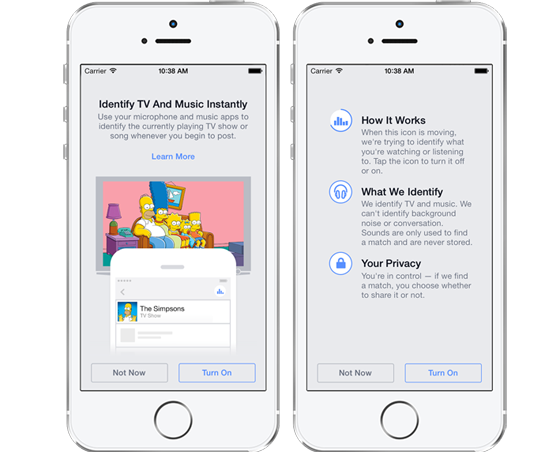 The social networking behemoth, Facebook, has launched a brand new feature today which can identify TV shows, movies and music playing in the background.

Resembling content-matching services like Shazam and Sound Hound, this new capability is a staggered release via an updated App Store app on iPhone and a Google Play app on Android, according to multiple reports and Facebook itself.

The well-informed Mark Gurman has learned this:

Facebook is said to be integrating the feature so Facebook users can more easily share what music they are listening to or what TV show they are currently watching to their Timelines.

The service will take input from your handset’s microphone.

Ellis Hamburger of The Verge has more info.

Apparently, Facebook will be listening when you post your next status update. That’s right, the app will automatically recognize the song you’re listening to and add it to your status.

When a matching item is found, a link to the corresponding Facebook pages of a TV show, movie or song will be optionally added to your status. Matching songs will be accompanied by Spotify, Rdio or Deezer previews, based on which music app you’ve most recently used.

“Use your microphone and music apps to identify the currently playing TV show or song whenever you begin to post,” Facebook writes.

They’re calling it audio recognition and here’s how it works, as per The Verge:

It starts listening as soon as you start typing a new status. There’s no need to tap “Listening To” or “Watching” in the status-creation screen. You can opt in to the feature for the first time by tapping a new button inside the status window.

When there’s a match, a badge pops up over Facebook’s feelings button, a small smiley face. The hope is that there will be a match by the time you’re done writing a status.

You’ll be able to easily turn off audio recongition by tapping a new audio icon in the top right corner of Facebook’s upcoming iOS app update.

Those who enable the feature will see the audio icon moving as Facebook attempts to detect a match when a user is writing a status update.

If you share music, your friends can see a 30-second preview of the song. For TV shows, the story in News Feed will highlight the specific season and episode you’re watching, so you can avoid any spoilers and join in conversations with your friends after you’ve caught up.

As per this support document, Facebook can currently identify “millions of recorded songs or TV shows” broadcasting on over 150 channels in the United States, with more content to be added in the future. 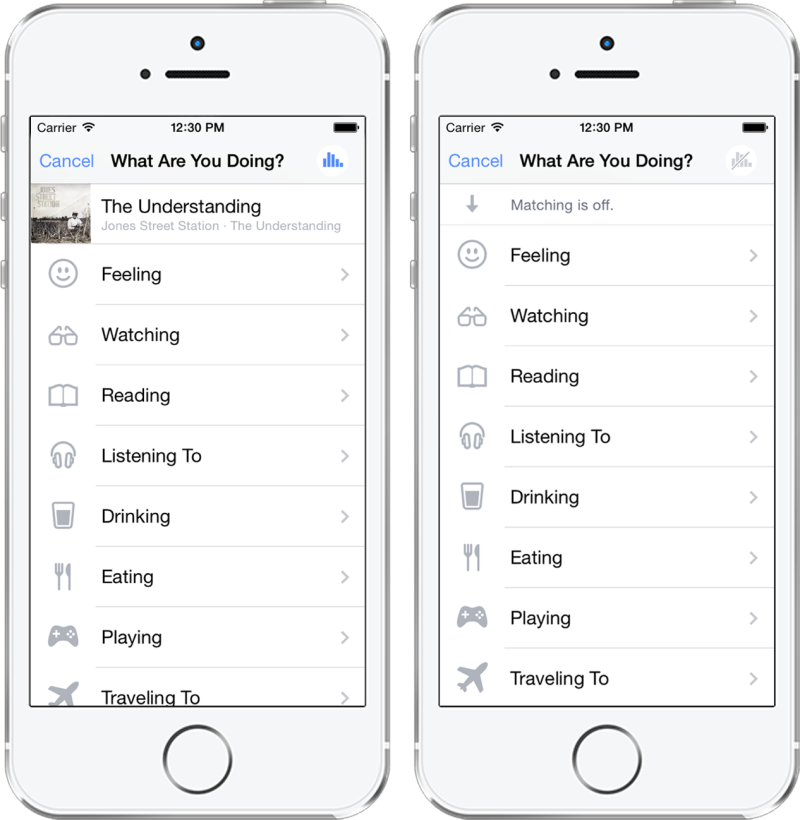 If you’re concerned about privacy, Facebook assures us that sounds are only used “to find a match” and are never stored on its servers. “You’re in control,” reads in-app description. “If we find a match, you choose whether to share it or not.”

We’ve known about Facebook’s plans to launch sleek new iOS apps and services throughout 2014. That being said, today’s report is especially interesting in light of talk of Apple teaming up with Shazam to integrate song identification right into Siri in iOS 8.

This would allow users to ask Siri questions like ‘what song is playing’, right from their Lock screen and perhaps help boost flagging sales of song downloads on iTunes.

According to a Nielsen SoundScan study, iTunes music download sales fell last year for the first since the iTunes store debuted in 2001.

As for Facebook, the audio recognition feature will roll out gradually to iOS and Android users in the United States “over the coming weeks”.