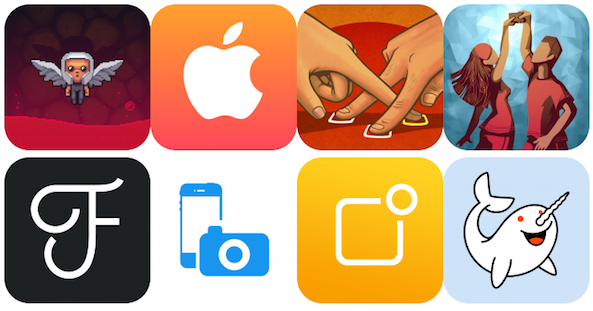 Today marks three weeks since we began App Recap, a daily column that recaps the best new, updated and discounted apps for iPhone, iPad and iPod touch. We hope you have been enjoying the variety of apps that we find worth sharing each day, and encourage you to add your own in the comments. App Recap rounds up the most important App Store developments each day, ranging from popular app updates to hidden gem releases. We’ve got 11 apps to check out ahead…

Fresco News delivers the most important news based on images with captions. You can then proceed to read the full-length news article written by publications like The New York Times, The Washington Post and Al Jazeera. The app supports push notifications and was recently updated with background refresh. Fresco News is free for iPhone.

Bounden is a two-player dancing game with choreography by the Dutch National Ballet. Hold and tilt your device around a virtual sphere, following a path of rings, and you’ll be guided into a dance routine. The app has seven different dances that can be unlocked, plus tutorial videos with professional ballet dancers. Bounden is $3.99 for iPhone.

Narwhal for Reddit was actually released almost two months ago, but it deserves a mention nonetheless. The app is a feature-rich app that makes browsing and commenting on Reddit a breeze, thanks to an easy to navigate user interface. If you’re looking for an Alien Blue alternative, Narwhal for Reddit is free on the App Store for iPhone.

Apple released an update for its official WWDC app today ahead of the annual developer’s conference next month. The app has a new icon and schedule for the 2014 keynote, which confirms that it will be taking place on June 2nd at 10:00 AM Pacific. To follow the latest news and information, WWDC is free on the App Store for iPhone and iPad.

Google Maps has been updated for the second time in a week, with smoother and faster transitions when moving through Street View. The update pushes the app to version 3.1.0. Google Maps is a popular alternative to the stock Maps app, providing accurate mapping across 220 countries and territories. The app is free for iPhone and iPad.

To celebrate the release of Bounden, Game Oven has made its popular two-player puzzle game Fingle free for a limited time. If you’ve ever played footsies under a table, this is basically the same thing but with your fingers and using an iPad. Bend both your fingers and brain across 130-plus levels in Fingle, marked down from $1.99 to free for iPad.

Thinglist has gone free for the first time since launching on the App Store over a year ago. The want-to-do-list app helps you keep your personal life organized with things you want to do, such as reading a book your friend recommended or listening to a new album you heard about. Thinglist, regularly $1.99, is free on the App Store for iPhone.

Laser Hell is free for one day only, so get downloading quick. The seemingly impossible rhythm-based techno music arcade game involves tapping to keep your balance, while avoiding hellish lasers and prolonging your life as long as possible. The game was recently updated with an improved anti-cheat system. Laser Hell is free for iPhone and iPad.

That wraps up today’s edition of App Recap. Thursday is normally the busiest day of the week in terms of new, updated and discounted apps, so be sure to check back tomorrow for what should be a jam-packed edition of this roundup. With the Memorial Day weekend just around the corner, too, we could see a lot of sales from major developers within the next few days. Stay tuned.