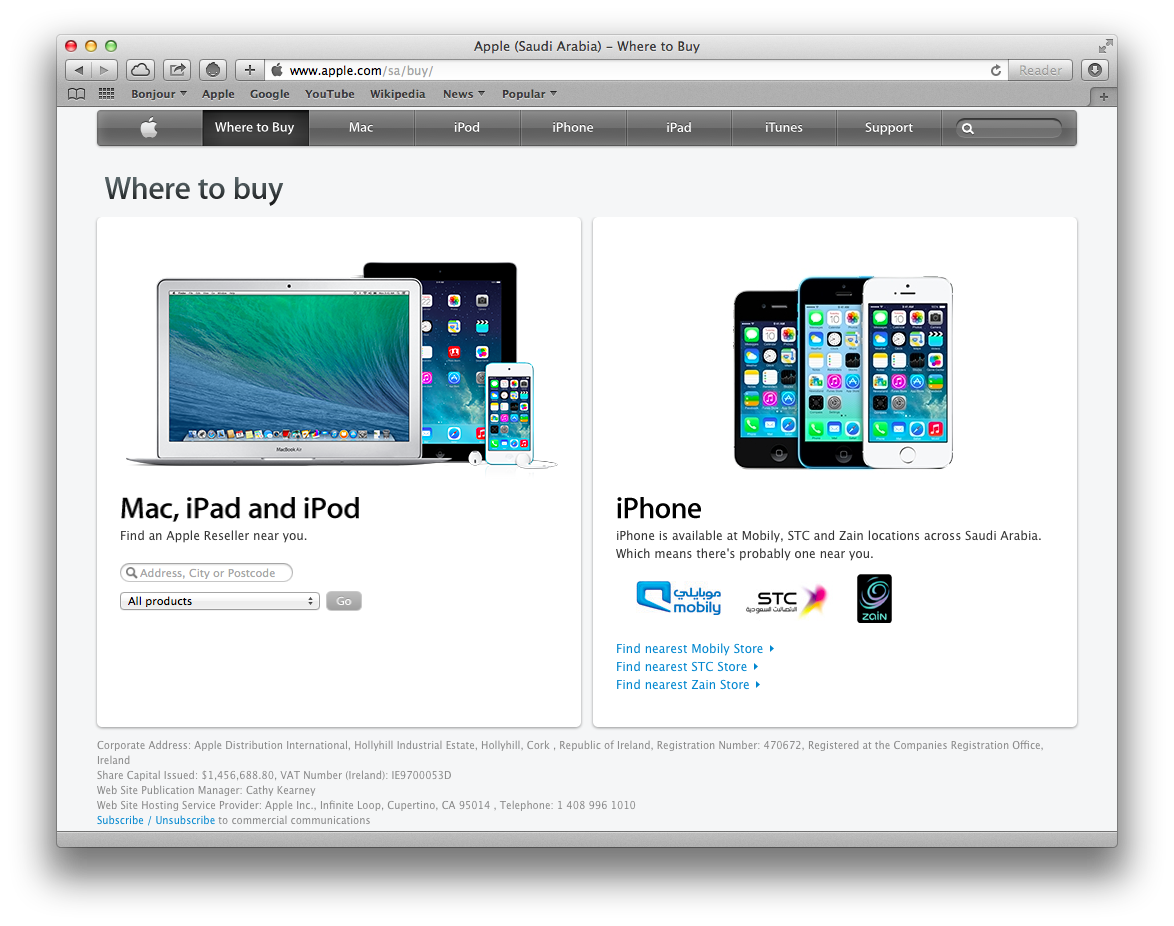 Although the Saudi Arabia Online Apple Store has been up and running for years now, you can’t really add products to the shopping basket because Apple isn’t licensed to sell its products directly to consumers in the 28.3 million people market.

Instead, the iPhone maker relies on a network of third-party resellers to market and sell products in the country, a common practice in all regions where Apple hasn’t yet established its direct presence.

This is about to change as the firm has apparently been cleared to market, sell and develop products directly to Saudi Arabian customers through its subsidiary name of ‘Apple, Saudi Arabia’…

This means Apple can now market, maintain and develop products in the region through its new subsidiary name of ‘Apple, Saudi Arabia’.

As evidenced by the screenshot at the top, the Saudi Arabia Online Apple Store at press time still listed local distributors such as Mobility, STC and Zain. These outlets help sell, maintain and support iPhones, iPads, Macs and other Apple products offered to Saudi Arabian customers.

The iTunes Music Store started operating in the region in December 2012 and the iPhone 5s/5c went on sale in Saudi Arabia on November 1, 2014, just a month and a half following its U.S. debut.

An interactive chart put together by MobileUnlocked reveals that the entry-level 16GB iPhone 5s retails in Saudi Arabia for 2,799 Saudi Riyals, or approximately $746 (excluding taxes).

The figure represents 2.45 percent of the nation’s gross domestic product (GDP) and is a rather bearable $97 premium over Apple’s asking price of $649 over in the United States.

For reference, China is the most expensive country to own an iPhone 5s: the handset’s cost typically represents 9.55 percent of the country’s average GDP. In the U.S., an average selling price of the iPhone 5s is just 1.15 percent of the nation’s average per-capita GDP.

If you live in Saudi Arabia, we would love to hear about your experience buying Apple products through local resellers. Don’t be shy, just drop us a line or two in the comment section below.