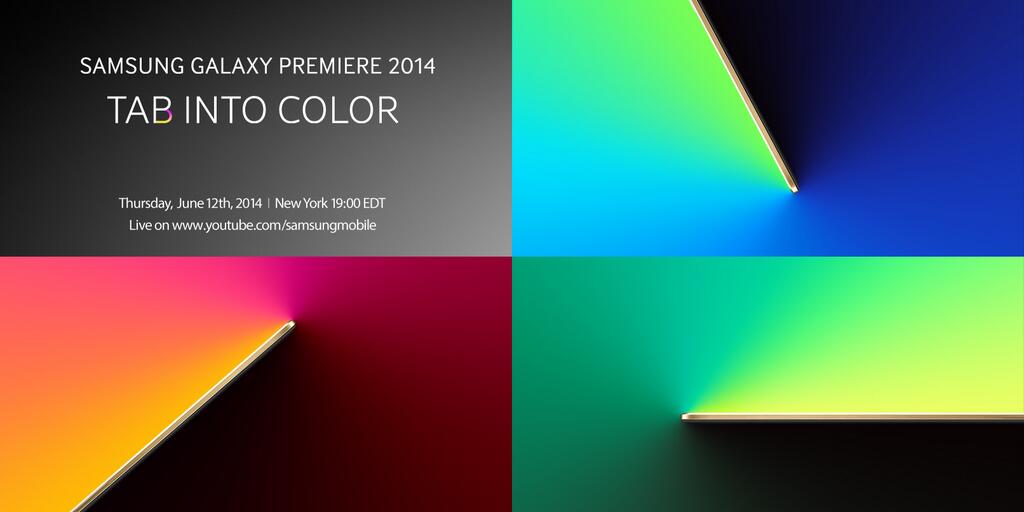 As Apple has launched zero products this year, its main rival Samsung Mobile has scheduled a tablet-focused media event for Thursday, June 12, 2014.

The invite-only Samsung Galaxy Premier 2014 event will be held at Madison Square Garden in New York City, which can seat 18,000 people.

The invite graphics adorned with the Tab Into Color tagline indicates that the company might be on the verge of unveiling its tablet series in colors, perhaps?

The event will be live-streamed on Samsung Mobile’s YouTube Channel.

Colors or not, Samsung is bound to unveil new Galaxy Tabs at the event and if the venue is anything to go by, it’ll be a lavish event on par with the theatrical Galaxy S4 launch last year.

Samsung Mobile head J.K. Shin in an interview with The Wall Street Journal earlier this morning confirmed that the event will serve as a launchpad for new tablets.

Samsung will launch a new line of tablets for the first time in New York on June 12 at Madison Square Garden as it attempts to catch up to rivals like Apple Inc.

An FCC certification filing from yesterday has suggested that one of the new devices slated for the June 12 unveiling could be a new Galaxy Tab S with a 10.5-inch screen using AMOLED technology, although some outlets are mentioning a massive 13.3-inch display.

SamMobile thinks specs will include Samsung’s octa-core processor with 3GB of RAM clocked at either 1.3 or 1.9GHz. The ultra high-resolution screen should offer a 2,560-by-1,600 pixel resolution. The device is said to ship with Android 4.4.2 KitKat pre-installed and offer Samsung’s TouchWiz Magazine UX user interface.

Samsung first ventured into a large-screened tablet territory with the January 2014 announcement of the Galaxy Tab Pro series of 12-inch tablets.

Apple is rumored to be working on a larger iPad Pro device featuring a screen measuring 12.9 inches diagonally. If such a device is indeed in the works, the rumored iOS 8 split-screen multitasking feature (landscape only) should fit the bigger canvas perfectly.

We’ll keep you posted on Samsung’s June 12 event and will let you know of any new devices launched. The South Korean conglomerate also has another media event scheduled just days before Apple’s iOS 8 and OS X 10.10 focused WWDC, which kicks off with a keynote on June 2.

Should Apple do a larger iPad or is a 13-inch screen too close to the notebook territory?