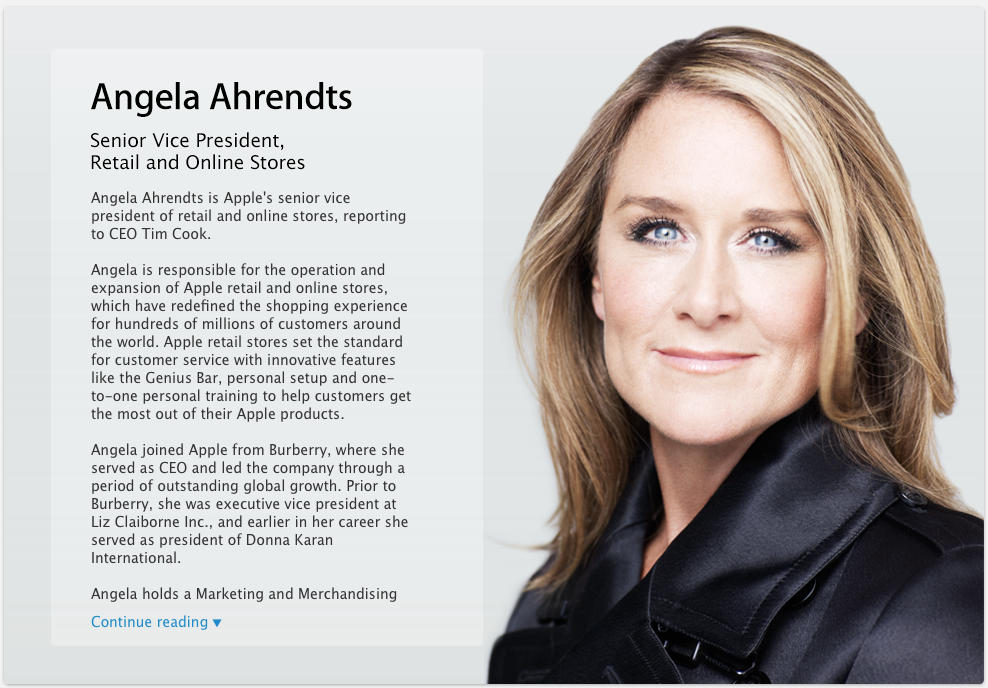 Talk about a signing bonus. After officially joining Apple last week, word got out today that Angela Ahrendts has already received 113 thousand units of restricted stock. At today’s prices—remember, APPL is back up around $600—the shares would be worth roughly $68 million.

This makes the company’s new SVP of retail and online stores one of the highest-paid executives in the industry, but of course, she’ll have to wait to cash in. According to a filing with the U.S. Securities and Exchange Commission, the full amount won’t be available until 2018…

MacRumors was first to spot the filing:

Ahrendts will receive shares spread over several different vesting periods between June 1, 2014 and June 14, 2018, assuming Ahrendts stays with the company. Were Apple’s share price to rise, the RSUs could potentially be worth significantly more over that time.

A restricted stock unit is a standard form of stock compensation that reward employees for staying with the company. They are used as general compensation and for employee retention. Each RSU converts to one share of stock on its vesting date, typically set annually based on award date.

There’s a few things worth mentioning here. For starters, once Ahrendts’ shares have vested, they’re eligible for dividend payout. So if all 113K shares were available today, with Apple paying $3.29 per share, per quarter, she would make roughly $1.4 million in just dividends per year.

Also keep in mind that Apple announced last month that it plans to continue to up dividends, and is going to split its stock in June. The 7-1 split will turn Ahrendts’ 113K restricted stock units into almost 800K shares, although technically it’ll still be worth the same amount of money.

Apple announced last October that it had hired Ahrendts, the former CEO of luxury clothing brand Burberry, to head its retail arm. Industry watchers have praised the company for the high-profile hire, given her impressive background and the trouble they’ve had at the position.