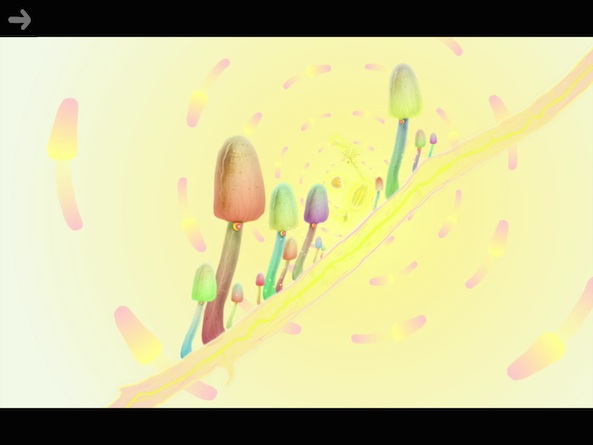 Fans of puzzle games will likely remember the stunning and bizarre world of Machinarium. The game was acclaimed for its beautiful landscapes, intricate puzzles, and overall immersive gameplay.

Amanita Design is back with another incredible contribution to the puzzle game genre for the iPad. In Botanicula, the world is more natural with trees, bugs, and moving plant life. The world also has a creepy unnatural element to it with the likes of the photosynthesis-sucking spiders that are terrorizing the residents of the tranquil community…

As is typical with Amanita Design, the game is filled with detailed, creative displays of art. Players embark on a fantasy adventure with the help of five googly-eyed creatures. The group, which consists of two nut-like creatures, a mushroom, a twig, and a feather, help their fellow tree dwellers by rescuing children, finding missing items, and collecting birdlike creatures for an invention.

The game consists of seven acts, each with a different goal. For example, in “The Five Keys,” players must track down five missing keys that unlock a special room. The keys aren’t just hidden under rocks or behind leaves. Oftentimes, you’ll need to find an item to give to one creature that will then give you another item that you use in a different place to reveal a hidden key.

The soundtrack fits the mood perfectly. The game is rich in fantasy imagery and the music that accompanies it helps immerse you in the story. None of the creatures speak a human language. They talk in mumbles and their words are translated to us through the use of visuals. 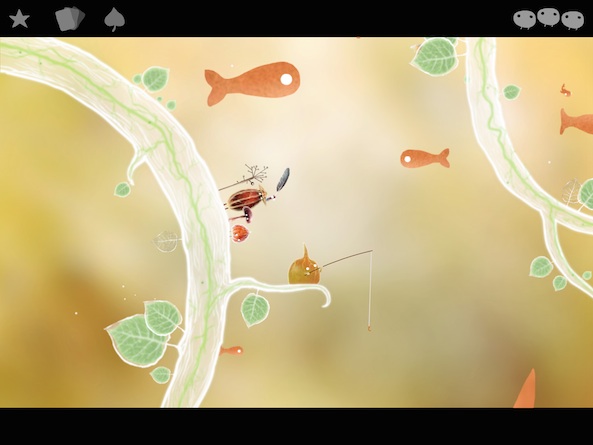 The goal of the game is to stop the spiders from sucking the color out of the world. I believe the spiders are the “Botanicula” of the game as the title is a reference to very creepy series of children’s books about a vampire rabbit called “Bunnicula.” In this game, the spiders suck the color out of leaves, branches, and anything they can sink their teeth into. Players embark on an adventure that helps them save the last seed of their home tree in order to start again somewhere else.

To move the group, tap the edge of the screen in the direction you wish to go. An arrow will appear where your finger lands, letting you know that you’ve chosen a legitimate path. Each screen usually has at least two, oftentimes more, possible directions since the group is usually walking along branches. For example, on one screen, you could send the group to a branch that goes north, one that goes west, or one that is in the middle of the two heading northwest. Tap the edge of the screen where the branch leads to see if the group can go that direction. If it is possible, the arrow will appear and the team will begin their travel. Explore each direction to find out where it leads.

It is important to stay on a screen and explore every aspect of it. You may not think there is anything interesting on a particular branch, but after taping on a leaf, an important creature may appear. Not only that, but waiting around to see what the creature will do could provide you with an important item. Sometimes, you must interact with characters more than once to get what you need. For example, in one scene, the group comes across a snapping crab. You must tap him to wake him up and he will chase you away. That’s not it. You must then go back and let him chase you again in order to get him to stomp on the branch and cause your group to fall onto a new branch, which puts you onto a new location.

As you can see, the game is rife with intricate, multifaceted puzzles. You can’t think linearly in this world. Anything you assume to be true may be turned upside down as you follow the journey.

I have to admit, I had such a hard time with some of the puzzles that I eventually broke down and looked up a walkthrough to get some hints. Since the game has been available on OS X for a couple of years, there are a number of helpful walkthroughs to get you through the tough spots, of which there are many. I don’t recommend you use these cheats unless you are completely stuck as they ruin the fun of discovering new things in the game. 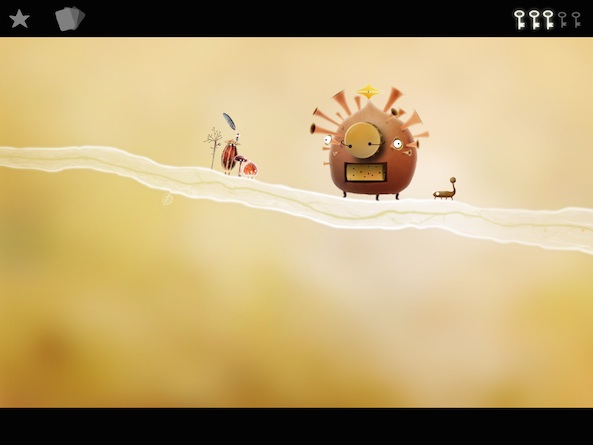 Amanita Design sure has a way of blowing everyone else out of the water with their incredibly well made games. The attention to detail makes the visuals a treat in every scene. The puzzles are layered and complex enough to really force you to think about what you might need to do next. Exploration and interaction is key to getting through the entire game.

I think a hint system is much needed in this game. Maybe they could add a little sparkle in an important location when players tap a button.

Botanicula costs $4.99. This game is incredible and worth the price. You will be satisfied with hours of fun as you follow along with the engaging story and help the little tree friends try to save their home. The replay value isn’t particularly high since you can’t go back and play individual acts once you’ve completed them. However, there are hundreds of achievements to unlock, including discovering new creatures. So, when you’ve completed the game, if you haven’t already found all of the achievements, you can go back and try again.

Fans of puzzle-based adventure games are sure to fall in love with this one. It looks great, has multifaceted complex puzzles, and features a rich and engaging storyline. I highly recommend it for fans of the genre. It is fantastic. This game is available on the iPad. Download it in the App Store today.

Machinarium is a lot like this game and is made by the same game developer. You could also compare it to The Room Two, but with more adventure style mechanics.

What do you think of Botanicula? Let us know in the comments.