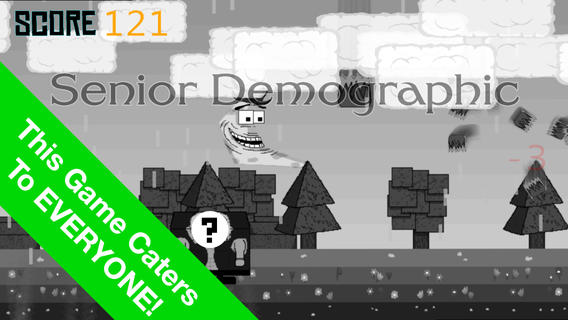 I love games that are a bit tongue-in-cheek. Developers who don’t take themselves too seriously are probably going to go far if they apply their humor to their titles.

SkyFehl is a simple arcade game that is rich in strange landscapes, silly effects, and a veritable who’s-who of playable characters that might get them shut down if they weren’t so clever about it…

Players embark on a simple quest, to crush all the stuff. Flaming meteors fall from the sky and your job is to run into it to destroy it. What makes the game difficult is that you can’t let one land on your head. The attack must be from the side, a split second before the meteor hits the ground, or it will crush you instead.

To move around, touch the left or right side of the screen. That’s all there is too it. 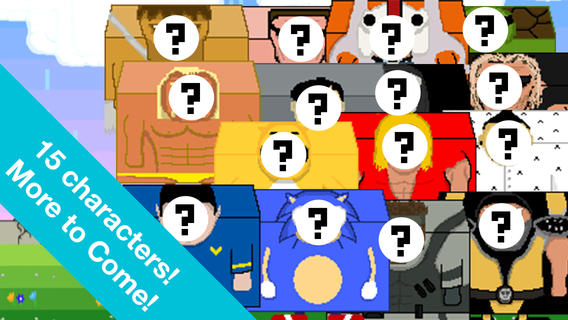 What makes this simple game so fun is the hilarious characters that find their way into the game. Play as Luke Skywalker in his rebel flight suit, V from “V for Vendetta,” Sonic the Hedgehog, and many more. I don’t want to give away too much because part of the fun is seeing which character you will get to play as next.

In addition to meteors that fall from the sky, special world-altering items fall. In “Crit or Die,” the screen develops screen noise that looks like an old television set going bad. In “Winners Don’t Use Drugs,” everything turns psychedelic. “Senior Demographic” turns the screen old-timey black and white. Each world alteration includes a related sound track, as well. For example, a Tin Pan Alley style piano song plays along in Senior Demographic. Electronica music plays in the “Raves LOL” world. 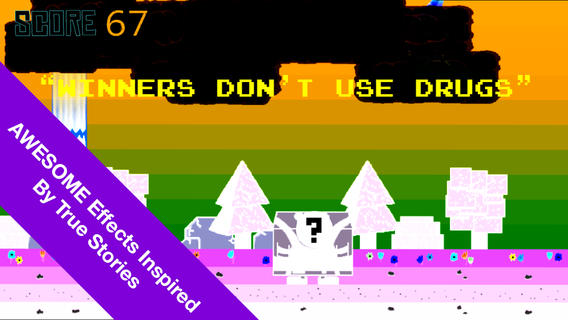 As mentioned above, the goal of the game is to crush the meteors from the side without getting hit from above. Players earn 10 points for destroying meteors in the normal world, but the point score increases in different worlds. Some worlds yield higher scores than others.

When you die, you are presented with a friendly reminder of how poorly you did. “Not good enough, loser.”

SkyFehl is free to download and advertisement supported with a small but somewhat annoying banner at the bottom of the screen. Unfortunately, there is no way to pay the developer to get rid of that pesky ad banner. This game is available on the iPhone, iPad, and iPod touch for free. Download it in the App Store today.

Does SkyFehl look interesting to you? Let us know in the comments below.