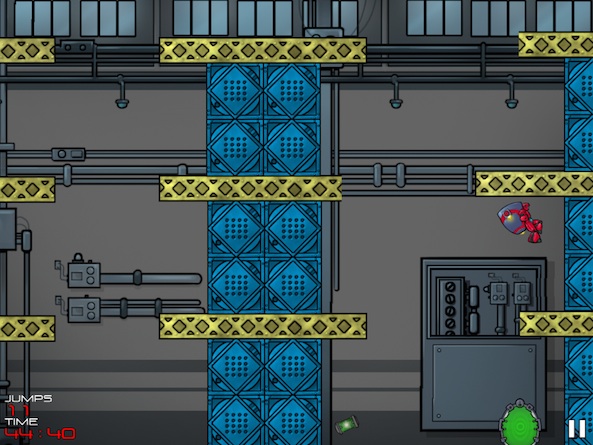 One of the most popular types of games in the App Store is the physics-based aim-to-shoot kind. We can attribute the success of the genre to Angry Birds. It may not have been the first, but it was certainly the most popular. If you are a fan of physics-based games, but are getting tired of the same old slingshot style mechanics, there is a new bird in town.

Suited Up uses the idea of aiming to shoot, but players must select the point at which the jumper will arc. Instead of dragging to aim, just tap the screen to mark your target and see where you land…

The game features one tiny jumper, outfitted with a rocket-propelled suit. He takes off from one platform and lands on another, if you’ve aimed correctly. The background is usually based on some sort of industrial theme, either inside a factory, or outside, surrounded by space stations. However, there are four different worlds, each with a different theme.

The foreground is made up of boxes, girders, planks, and other items that must be hurdled by our vaulting hero. There is always one canister on each level, which is usually out of the way and difficult to reach, but will increase your score if you can get it.

There is also an exit portal that will suck the jumper in if he gets close enough. The goal is to get your jumper into the exit portal.

There is only one control; tap. Players tap the screen where they want the jump to arc. A target appears and then the little guy jumps. If you miss, you can try again and a ghost of your previous attempt will appear so you can remember what not to do the next time.

Every level can be rotated for landscape or portrait gameplay. Some levels are designed different when in one viewing mode or another, so rotate your screen often to see if there is an easier way to reach the exit. 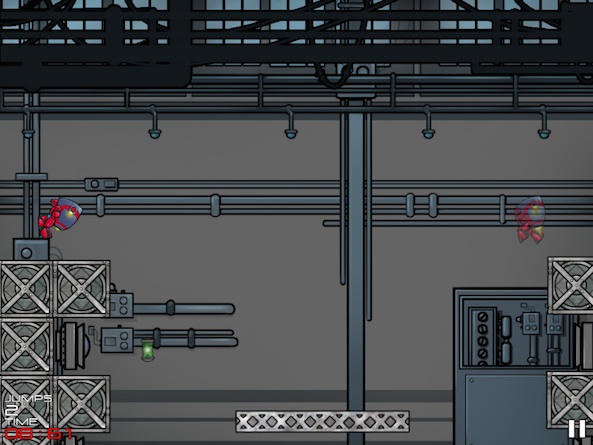 The goal is to get to the exit portal as fast as possible and in as few jumps as possible. Each level has a par time and par jump. Make it within the limit to move up in ranks.

When you first start a level, rotate the screen to see if the obstacles are repositioned more optimally at a different angle. Then tap the screen above the jumper to select the target. After the target is set, the jumper will rocket upward and reach the peak of his arc where you selected. Then, he will drop downward at the given trajectory to his landing spot. If you aimed properly, he will land on a crate or platform. If not, he will plummet to his death and you must try again.

Estimating the trajectory is very difficult, and gets harder as levels progress. One slight misplacement and your jumper may be shredded by blades, smashed by a cannonball, or stuck on a platform that is out of the way.

When you get a second try (or third, or fourth), you will see a ghost image of your previous turn. Try to adjust your target based on what you did wrong last time. If the jump came up short, tap the screen a bit further away. If you overshot, back the arc up.

Remember, each level has a time and jump par. So, to get the highest score, don’t hesitate, and don’t miss. The best way to finish the level under par is to find the right target arc for each jump by making mistakes over and over again, and then repeat the level one last time the right way.

In addition to the premade levels, of which I believe there are 40, players can build their own obstacle courses with the level editor. You can make your level look however you want and then upload it for others to play.

Challenge friends to beat your score and give them a shot at attempting to finish your complex levels. You can also play the game with the global ghost to see how other players aimed their target arc.

Players unlock new suits for earning achievements. For example, if you complete the Hanger world with a score of A+, you will unlock the Rusted jumper suit. Replay levels to get a higher score and unlock all 30 suits. 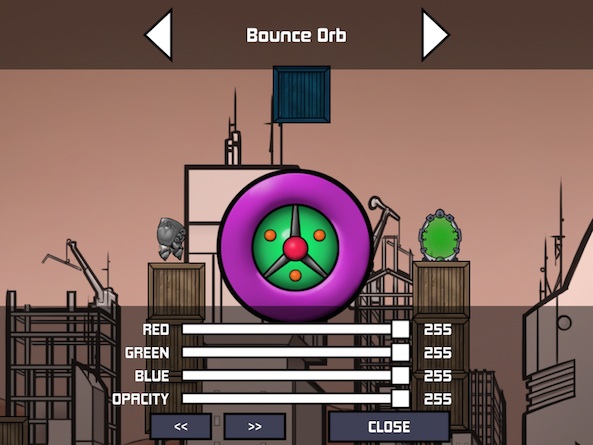 This game is very challenging, but keeps you coming back for more. Even though you may complete a level within the jump par, you will find it very difficult to make it within the time par, which will drive you crazy and make you want to replay until you make it.

Currently, you can’t zoom in or out. Sometimes, the exit portal is off-screen and difficult to find. Luckily, the game’s developer is working on a zoom feature that will be added in the next update.

Suited Up costs $1.99, which is a decent price for a game like this. It may seem a bit higher than most in the genre, but there are no in-app purchases at all. The replay value is through the roof since you will want to keep trying to get the highest score possible on each level. Plus, the level editor makes it possible to play an uncountable number of different courses.

Fans of physics-based games will love this. It has all of the traditional mechanics, like precision aim, but offers it in a completely different way. If you are looking for something new in the genre, you won’t be disappointed. This game is available on the iPhone, iPad, and iPod touch. Download it in the App Store today.

Obviously, the Angry Bird franchise is the most popular on iOS, but Cut the Rope 2 is another well-liked physics-based game.

What do you think of Suited Up? Tell us in the comments below.