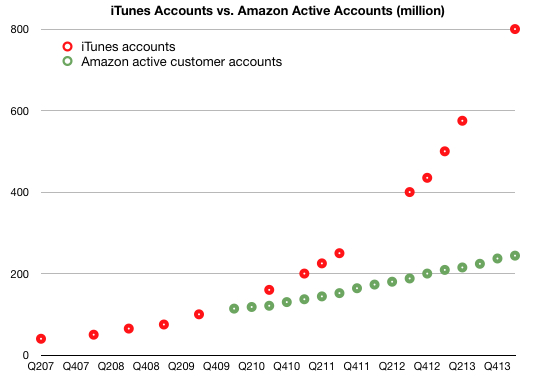 Following Apple’s most recent earnings report, Tim Cook revealed in a conference call with analyst that there are now more than 800 million iTunes accounts in use and said that “the majority of those have credit cards behind them.”

How does this compare to Amazon, the king of online commerce? Turns out that Apple actually has twice as many credit cards on file than Amazon, at least. This poses a tremendous opportunity should Apple decide to introduce a mobile payment service of its own, as expected…

Independent industry analyst Horace Dediu shared the above chart in a tweet this morning, highlighting the stunning gap between the two technology giants.

A disconnect between the number of active iTunes accounts and iOS devices exists because not all iOS devices are new purchases (many are upgrades). Besides, some folks own multiple iOS devices, some accounts don’t have a valid payment method attached and others are being used for stuff beyond payments.

OS X, iWork and iLife used to contribute to the category, too, before Apple switched to free OS X updates with the release of Mavericks and free iWork/iLife downloads with new iOS device purchases as of last September. 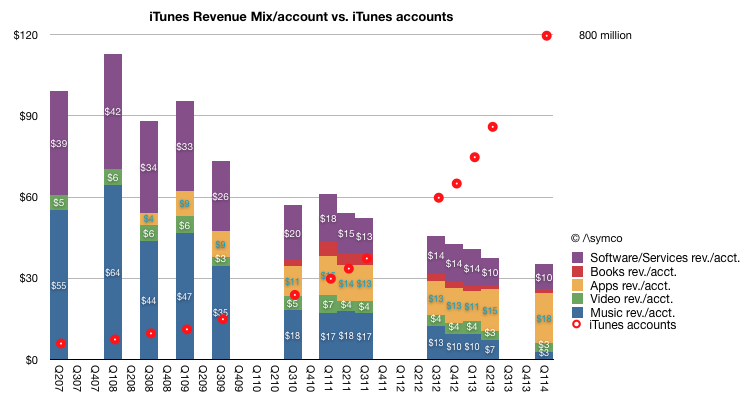 Apple is a hardware company that runs a few online-only digital stores and sells both its own and third-party products via its online stores. Amazon is both an online commerce company and a physical goods reseller that sells way, way more digital and tangible items compared to Apple.

Dediu’s chart focuses on just the number of active credit cards on file. We don’t know which accounts are being used to purchase digital items such as apps and media in the App Store and iTunes Store and which ones get used for purchases of physical goods.

iDownloadBlog has discovered that Apple is getting ready to roll out its sophisticated fingerprint reader across the entire iOS device family (it’s currently an iPhone 5s exclusive).

That being said, if there really is an Apple-branded mobile payment solution in the works, the established iTunes user base with credit cards on file will surely give Apple a huge lead over Amazon.

Assuming such a solution launched soon, would you be willing to pay for physical goods using your iTunes account?