There’s hardly any doubt at this point that Apple will roll out its Touch ID fingerprint reader to all iOS devices sooner than later. As you know, the sophisticated fingerprint sensor debuted last September as an iPhone 5s exclusive and is based on technologies from Israeli startup AuthenTec that got acquired by Apple for the reported $356 million in the summer of 2012.

While Apple was originally rumored to bring fingerprint-scanning to its tablet lineup, its manufacturing partner TSMC was unable to build enough of the sensors for the iPhone 5s alone, causing handset shortages after the launch.

Notable mentions of Touch ID for the iPad have been discovered in the iOS code, indicating an upcoming iPad hardware refresh might include the fingerprint sensor. It’s worth pointing out that iOS code frequently contains placeholders and hooks for unreleased features that never see the light of day. This is not the first time Apple’s code references Touch ID for iPads but we felt you should know about this…

A French iOS developer was able to find a reference to the iPad family in Touch ID’s resources, as evidenced on his screenshot below. 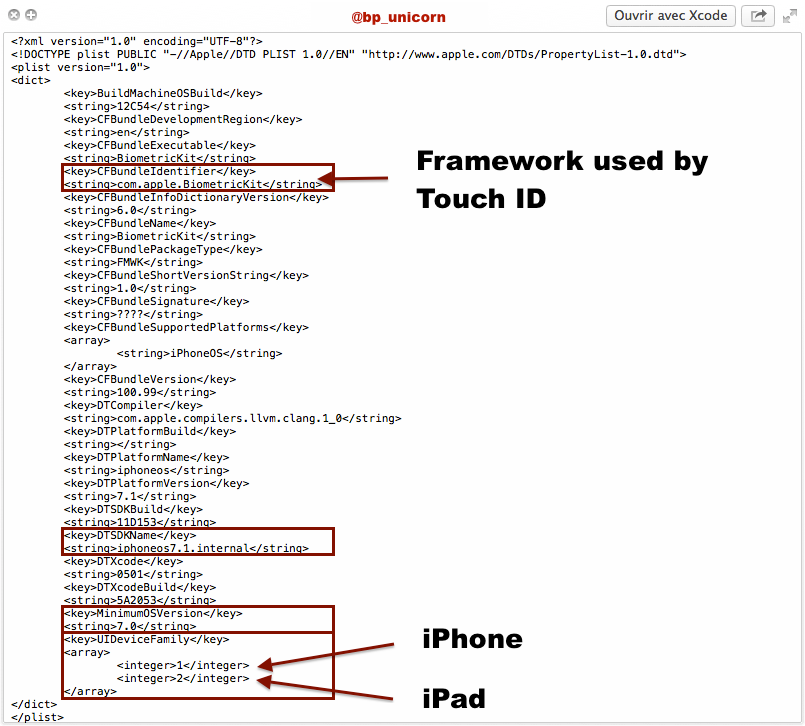 Mentions of Touch ID for both the iPhone and iPad were spotted in strings for a BiometricKit framework that deals with the user interface which enables scanning of a fingerprint on the Home button. 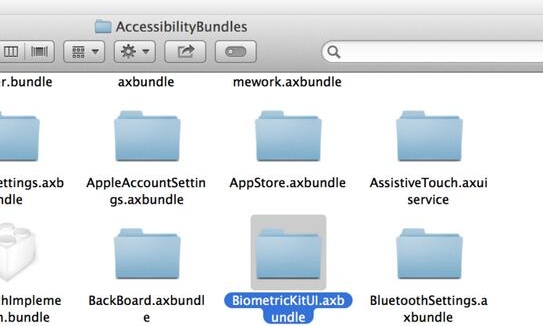 A text string accompanying the ‘BiometricKitUI.axbundle’ folder describes an image showing a person “holding an iPhone with their right hand while touching the Home button with their thumb.”

BiometricKit was later removed from the iOS 7 Beta 5 SDK, though smaller traces of it did appear in subsequent SDK releases.

The framework in question is private because Apple currently does not expose Touch ID functionality to third-party developers for security and privacy reasons.

Sources claim that Apple is “very, very serious” about a mobile payment solution. If there’s indeed an Apple-branded mobile payments service in the works, Touch ID should be a major part of that.

Coupled with Passbook/iBeacon and the more than 800 million iTunes accounts, most with credit card on file, Apple is almost certainly going to use Touch ID as a secure authentication method to approve payments other than purchases in its digital content stores.

According to Apple’s boss Tim Cook, mobile payments were “one of the thoughts behind Touch ID.” Now, chatter coming out of Apple’s supply chain suggests the firm has commissioned TSMC to start manufacture of Touch IDs for the next iPhone this summer, in time for a rumored Fall release of the handset.

TSMC is said to be building the sensors at its twelve-inch fab using a 65-nanometer process technology, according to a January report by the Taiwanese industry publication DigiTimes. The report doesn’t mention Touch ID for iPads.

TSMC, or Taiwan Semiconductor Manufacturing Company, is an exclusive manufacturer of Touch ID sensors for the iPhone 5s. The world’s largest independent semiconductor foundry, TSMC is rumored to start building future iPhone and iPad processors soon as Apple looks to break its dependency on Samsung for components.