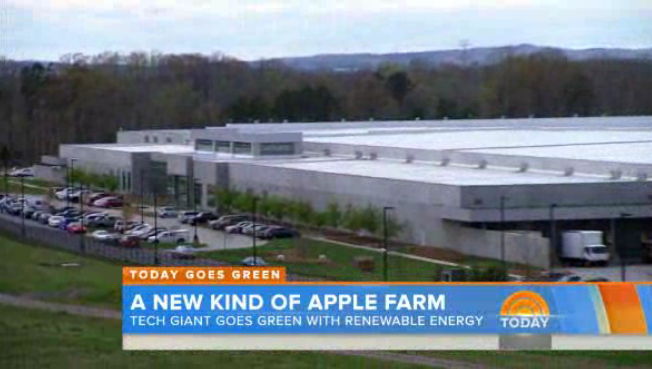 Continuing with its recent ‘green’ marketing push, Apple offered folks a rare look inside its Maiden, North Carolina data center last night. The company paired up with NBC chief environmental correspondent Anne Thompson to do a spot on Thursday’s edition of the ‘Today’ show regarding its various environmental initiatives.

The piece is fairly short—just under 3 minutes—but it’s interesting because it gives you a peek inside Apple’s data center operations, and details some of the equipment used to power the large buildings. Also, it features a brief appearance by the company’s newly-appointed Vice President of Environmental Initiatives Lisa Jackson…

Here’s the clip via AppleInsider (sorry, it’s in Flash):

Apple runs its iCloud online synchronization service, among other things, from the North Carolina data center. Unveiled in 2011, the facility garnered some initial criticism from Greenpeace and others over its power consumption, but it now runs on 100% renewable energy thanks to its super-sized solar panel and fuel cell farms.

In fact, the Today story comes just a few weeks after Greenpeace publicly praised Apple for its efforts to reduce its carbon footprint, awarding it a perfect 100% Clean Energy Index score. It also rounds out an unusually heavy PR week for the company, as it touted its ‘green’ achievements and redecorated stores in honor of Earth Day.

Wow, Apple sure has come a long way since Steve Jobs penned the infamous ‘A Greener Apple’ letter in 2007.