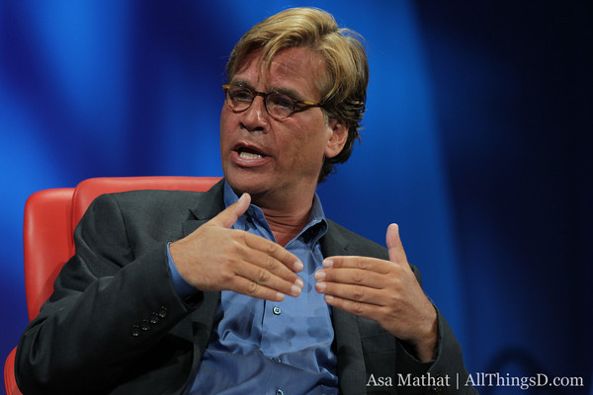 Aaron Sorkin took a moment yesterday to speak about his upcoming Steve Jobs movie. The Academy Award-winning screenwriter was answering questions at New York City’s School of Visual Arts for the Tribeca Film Festival last night when the subject of the Sony-backed Jobs film came up.

Sorkin of course avoided talking about the drama that surfaced yesterday surrounding the picture’s director and cast, but he did offer up a few details about his script. Some of it we’ve heard before—such as his goal to do something other than a ‘Jobs biography’—but there were a few new tidbits…

Mashable, who was in the audience during the Q&A, has more:

Aaron Sorkin’s take on former Apple CEO Steve Jobs — “one of the very few times I ended up writing what I set out to write” — will reveal both hero and antihero, the Social Networkwriter said Monday night at the Tribeca Film Festival.

“It’s not a biopic; it’s not the story of Steve Jobs — it’s something much different than that,” Sorkin said. “He’s a fascinating guy — part hero, part antihero.”

And then when asked about yesterday’s report on Danny Boyle:

“I don’t want to say that much tonight,” Sorkin said. “I don’t want to make any news or make anyone feel like I approached the movie in a different way. I’m going to make the movie speak for itself. But he’s a fascinating guy surrounded by fascinating people, and he had very interesting relationships with the people in his life.”

There’s been a significant interest in Sony’s Jobs flick, from both the tech world and Hollywood, since it was first announced in 2012. With Sorkin writing the script, and names like Christian Bale being tossed around for the lead role, it’s believed that the film has the potential to put up some big numbers.

Until yesterday, it was rumored that Bale was being eyed to play Steve Jobs in the movie with David Fincher directing. But according to a story from The Hollywood Reporter, Sony is now in talks with Slumdog Millionaire director Danny Boyle, and he is reportedly talking to Leonardo DiCaprio about the role.

But back to the script. Sorkin completed the screenplay back in January, and turned it in to the studio. He has in the past explained that it will consist of 3, 30-minute scenes leading up to 3 major Apple product launches. The film is expected to start shooting this fall, but its release data is not known yet.