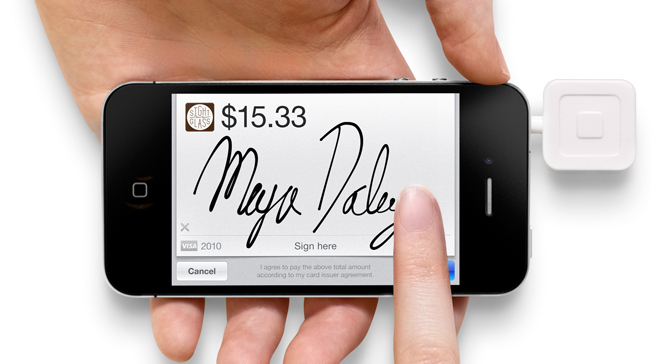 Mobile payments startup Square is looking to sell its business, following growing losses and shrinking cash reserves, according to the Wall Street Journal.

Square, founded by Twitter’s Jack Dorsey in 2009, makes software, hardware products, and services, including Square Register and Square Wallet, for customers to pay merchants in an easier way.

Square has discussed an acquisition with Google in 2014, according to the report, with prior talks dating back to 2012. Additionally, Apple is said to have held informal talks with Square about a deal, interesting given the mobile payment rumors that have been circulating the Cupertino-based company.

Square talks with Apple don’t sound advanced, but more off the cuff. Talks with Google, who has its fledgling Google Wallet product, sound more concrete, with three of the Wall Street Journal’s sources detailing that talks between the two companies resumed during recent months. The Information reported earlier this month that Google recently considered a purchase of Square, but said the companies aren’t currently discussing a deal.

Square is said to have lost $110 million in cash during 2013, a worrying sign, as over the past three years the startup has gone through more than half of the $340 million it has raised from venture capital firms. Despite the losses, Square is still being priced at roughly $5.2 billion on secondary markets.

Square’s products are currently being used by one million merchants to process $20 billion in transactions, yielding the company $550 million in revenue.

Square Reader, its first product, accepts credit card payments by connecting to a mobile device’s audio jack. Square Wallet allows buyers to use their mobile devices to pay merchants that make use of Square’s point of sale systems.

Its unlikely Apple would want to get into the cash register market, however products like Square Cash, which allows person-to-person money transfer over e-mail, could help build out Apple’s rumored iWallet. The Wall Street Journal reported in January that Apple is developing a mobile payment service with iTunes accounts in mind.

A Square spokesman disagreed with the Wall Street Journal’s report on Monday, saying: “We are not, nor have we ever been in acquisition talks with Google. While we appreciate that Square may be an attractive target for some companies, we have never seriously considered selling to anyone or been in any talks to do so.”

Recode reported in early April that Google wants to buy Square, but Dorsey is holding out for Apple. “He also believes, sources said, that his company’s design aesthetic and values match up much more closely with Apple than Google,” the report said.