Apple is preparing to release a bevy of new products this year, according to a new research note from KGI Securities’ Ming-Chi Kuo. The highly regarded analyst has laid out a timeline of all the products Apple is rumored to launch in 2014, beginning in Q2 and going all the way through December.

Kuo sees Apple starting with an iMac refresh in late Q2, followed by upgrades to the iPad Air and iPad mini. He then sees the company introducing a new 4.7-inch iPhone and the oft-rumored iWatch in Q3, and closing out the year with a refreshed Apple TV, 5.5-inch iPhone and a 12″ MacBook…

Here’s a graphic from Kuo’s report that shows Apple’s 2014 product roadmap (via AppleInsider): 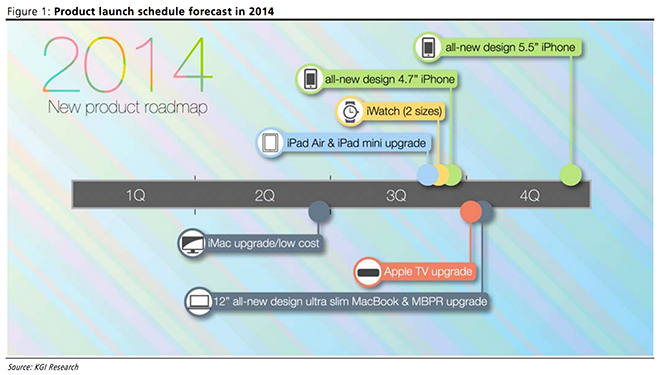 And here is an overview of all of Kuo’s predictions for this year, broken down by product:

The iWatch will come in two sizes: 1.3-inch and 1.5-inch, both with flexible, sapphire-covered AMOLED displays. The accessory will be “fashionable” in appearance and feature biometric recognition, an NFC chip, wireless charging, a 200-250 mAh battery, and a slim and light design. It’ll be made of various materials, and be offered at multiple price points, with the most expensive version costing “thousands of dollars.”

The iPhone 6 will also come in two sizes: 4.7 and 5.5-inches, with resolutions of 1334×750 and 1920 x 1080—coming in at 326ppi and 401 ppi respectively. Both models will feature an A8 processor, 1GB of RAM, NFC integration, optical image stabilization, and of course Touch ID. And as for appearance, both handsets will have up to 20% narrower bezels than and measure between 6.5-7mm thick.

Both the second generation iPad Air and iPad mini with Retina display are expected to come with an A8 chip and Touch ID. Kuo believes that the new Air could also see a bump in iSight camera quality thanks to a new 8MP sensor, and launch earlier than October. He adds that Apple is indeed working on a 12.9-inch tablet, but it will likely be next year before we see it.

An iMac refresh with a new processor could be Apple’s first product launch of the year, possibly debuting at WWDC. Kuo also sees the company introducing a new lower-priced model, which would help boost slipping iMac shipments. Additionally, a new MacBook model could be on the horizon: a 12-inch MacBook Air with a higher resolution display.

Keep in mind that each of these are just brief summaries of predictions from an analyst, but the fact that the analyst is Ming-Chi Kuo adds significant weight. Kuo has in the past provided accurate information about Apple’s unannounced product plans, and is considered a reliable source of intel.

Anyway, if even half of this forecast pans out, it’s going to be a big year for Apple.