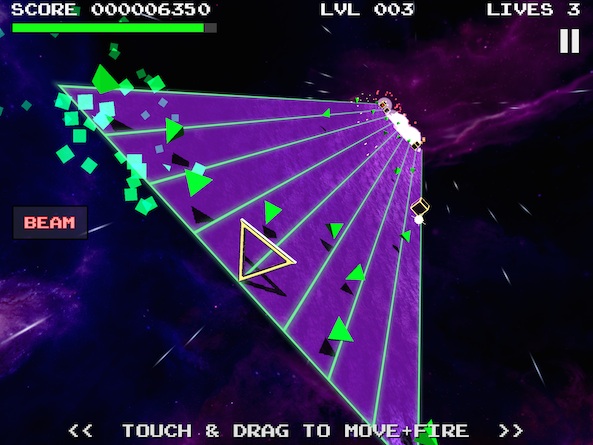 I can almost still smell the scent of stale popcorn and feel the sticky joystick in my hand when I play certain retro style games. At the risk of outing my age, when I was a kid, there was no such thing as home consoles. If you wanted to play a video game, you had to go to an arcade.

TriBlaster is an updated version of one of the best vector graphic 3D games of the 1980s, Tempest. Instead of a boring old fixed view, this game offers a multitude of angles to confuse and amuse you…

Oh, those beautiful neon vector graphics. There are so many geometric shapes with sexy straight lines. It totally brings me back to my childhood.

The game takes place in outer space. Your “ship” is a triangle that sits on a plane. The plane is made up of segments that bend, curve, or angle, depending on the level. Your ship is at the near end of the plane, closest to you. The enemy ships are at the far end. They range from basic cubes to a wide variety of polyhedral shapes.  They move forward along the segments, shooting at you. At the same time, the ships are releasing green triangles that you collect for points.

Every few levels, players encounter a geometric face that floats through the air, spitting green triangles. This is a bonus level that helps break up the repetitiveness of the basic shooter levels. The goal is to collect as many triangles in a row as possible. If you miss one, you start over. The level is timed. 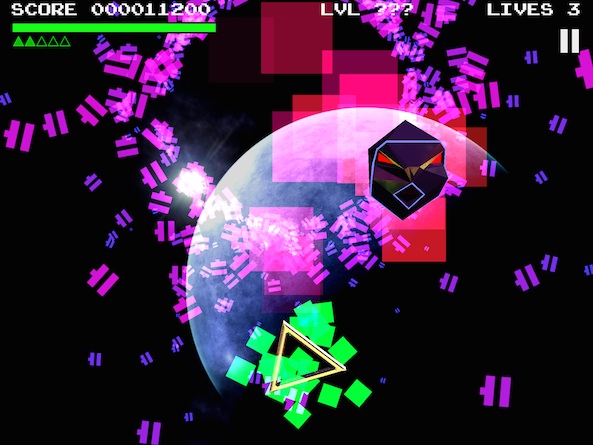 This is a traditional shoot ‘em up arcade game. It does not stray from typical game mechanics except for one special feature, which allows the player to jump backward off the plane in order to shoot at enemies that have made it to the end.

The goal is to destroy all ships.

To fire your weapon, you must move from side to side. The main weapon will not fire if your ship is not moving, so stay active. To move, drag your finger across the screen from left to right and right to left. Keep your finger along the bottom quarter of the screen. If you try to move by dragging your finger in the middle or upper section of the screen, nothing will happen.

As you “roll” from one side of the screen to the other, your weapon will automatically fire, hitting everything in front of you. As long as you keep moving, it is fairly easy to hit your target. The weapon is a spray shooter and tends to hit everything around it.

While you are shooting, green triangles head toward you, as well. Don’t worry. These are points, not bullets. Collect the triangles as you shoot the enemy ships.

If a ship does manage to make it to your end of the plane without you destroying it, it you will lose a life if you run into it. Keep in mind that you have to move if you want to fire your weapon, so the likelihood of running into one of the enemy ships is very high.

You can still shoot the enemy ships that have made it to your end of the plane by jumping. Instead of moving vertically above the plane, the ship will jump backward, giving you room between your ship and the edge. You’ll have some space to shoot the enemy ship again. Continue the same actions as when the ship is on the plane. Move to shoot.

Your ship has one special weapon that works for a limited amount of time before needing to recharge. When you hold down the Beam button, the weapon activates and blows away everything in its path. The Beam is perfect for destroying particularly difficult enemies because it still shoots, even if you are not moving.

So, if you stay in the same segment as a ship that is hard to destroy, you can keep shooting the Beam at it until you run out of energy or the ship is annihilated.

Along with enemy ships that get stronger as the game progresses, the planes get increasingly more complex, making movement harder. The game starts you off on a flat plane, but will tilt, curve, and angle. As you progress, the plane will have more angles and curves. It will also get wider and wider, making it difficult to get from one side to the other fast enough to destroy oncoming ships.

When you lose three lives, you must restart the game from the beginning. If you make it past level 25, you can start from that point in the future. The same goes for levels 50 and 75. However, reaching higher levels will be very difficult. The game features a demo that shows some of the higher levels and they look impossible to beat. Good luck. 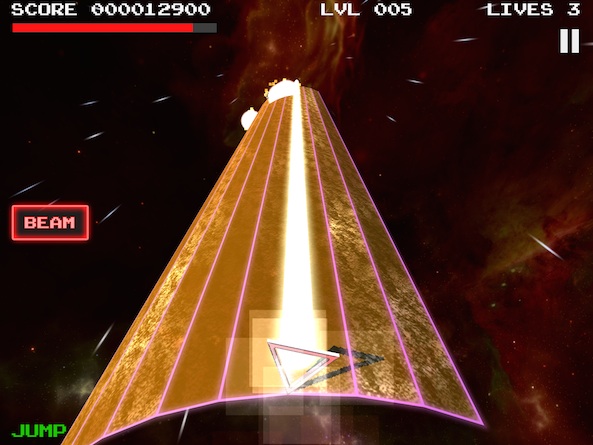 I love almost every aspect of this game. It is the perfect retro arcade shooter. It has fun, simple mechanics that I could play, and have played, for hours at a time.

The movement control is kind of awkward. I think I would prefer a virtual joystick. Maybe the game could have the option to switch between touch screen and joystick in the future.

TriBlaster costs $0.99. It has 100 levels, and I have a feeling not many people will make it that far. The replay value is high. From what I can tell, the levels are not randomly generated, so you could get really good at the game by practicing it over and over again, just like traditional arcade games.

I am seriously close to saying that everyone should get this. However, I know that not everyone is a fan of arcade mechanics. So, if you like vector graphics games or retro shooters, this is a must-have game for your collection. It is available on the iPhone, iPad, and iPod touch. Download it in the App Store today.

What do you think of TriBlaster?