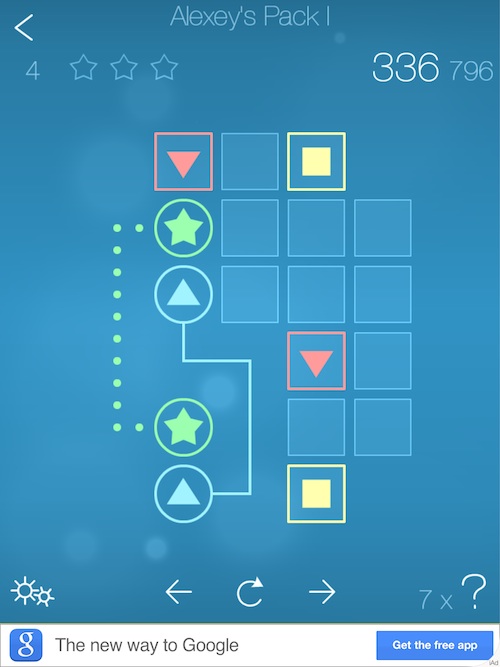 If you didn’t already know it, Alexey Pajitnov created Tetris in 1984. His simple shape-dropping mechanic changed the face of video game puzzles for decades to come. He probably didn’t know just how important his role in the world would be, but he is legendary.

Symbol Link is a puzzle game designed by the famed developer Pajitnov. Players connect two shapes that trigger an automatic connection of other shapes. It may never reach the level of success that Tetris had, but it is fun just the same…

The board is made up of a framework of squares. Some squares have colored shapes inside them. The rest are empty. At first, it may seem like the shapes are placed randomly, but upon closer inspection, you will see that they can be connected. All shapes can connect to each other, without crossing paths. It’s just a matter of figuring out how to connect them.

When you drag your finger across the squares, a line will appear on each square you touch. When the two connect, the squares will disappear and be replaced by a solid line. If you used the correct path, other shapes will connect to each other automatically. Those squares will disappear and be replaced by dotted lines. When the puzzle is complete, only the shapes and the solid or dotted lines will remain.

Different levels have different layouts of squares. There are three packs of 150 puzzles each that are designed directly by Pajitnov himself. The free portion of the game includes the first pack. The others can be unlocked for $0.99 each. 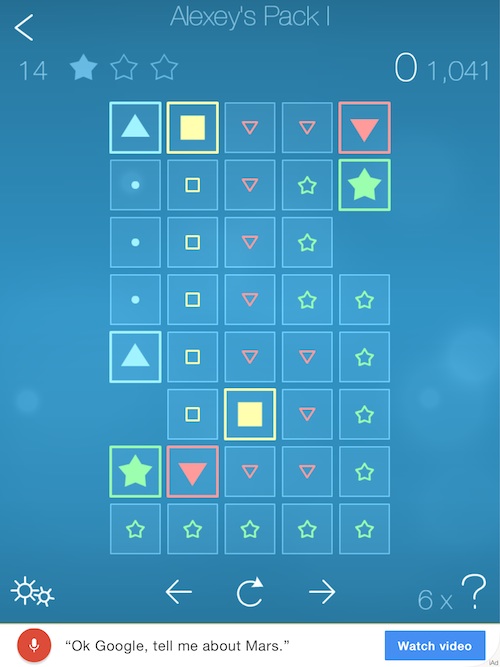 The goal of the game is to connect all shapes by drawing a path from one to another. The fewer moves you make, the higher you score. There are multiple ways to clear the board, but only one way to earn the most points.

Start by holding down one shape and then dragging your finger across the squares to its match. When they are connected, the squares will disappear and a line will remain. If you’ve connected two shapes using the right path, other shapes will automatically connect. Sometimes, you only need to make one path to connect every other shape on the board. While other times, you may need to draw two or three paths.

If you chose the wrong path, you can restart the level without penalty. If you manage to connect all shapes, but do not get the high score, the board will be populated with the paths you have already taken. For example, if you drew a path straight up vertically for each shape, one column will have a triangle in each, one will have a square in each, and one will have a star in each. The previously taken pathway will be delineated with an outline of the shape instead of the solid shape.

I haven’t figured out what triggers the auto-completion, but it seems like a path will automatically be drawn if the nearby path has a shape adjacent to it. I think the point of the game is to figure out which pairs of shapes trigger the auto-complete for the other pairs. 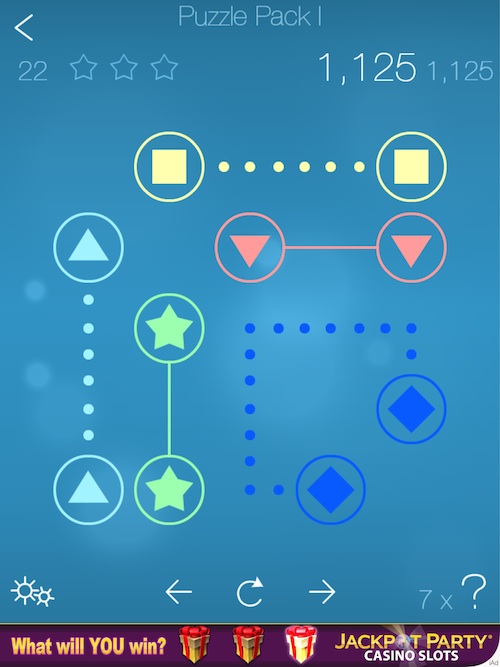 I love how the puzzles challenge your pattern identifying logic. At first, the results seem almost random. Why would the score be lower, even though you completed the puzzle? But, then, you start to see how the shortest path produces the highest score and you find yourself trying to reach maximum points.

The soundtrack is relaxing, giving you a Zen-like sensation as your brain goes into overtime to solve the puzzles.

Symbol Link is free to download and advertisement supported. The ads are at the very bottom of the screen and do not intrude on the gameplay. However, if you really don’t want to see the banner, all ads are removed when you pay for any puzzle pack. The free download comes with 600 puzzles that don’t have to be played in any particular order, so you are getting a really good deal. Additional packs can be purchased for $0.99 each.

I highly recommend this game to fans of the puzzle genre. It offers a proper challenge without frustrating you. There are multiple ways to solve each puzzle, but only one way to get the high score, so you can progress, even if you get it wrong. This game is available on the iPhone, iPad, and iPod touch. Download it in the App Store today.

This is somewhat similar to Flow Color. As noted in the game summary, it takes some design ideas from Number Link, as well.

What do you think of Symbol Link?