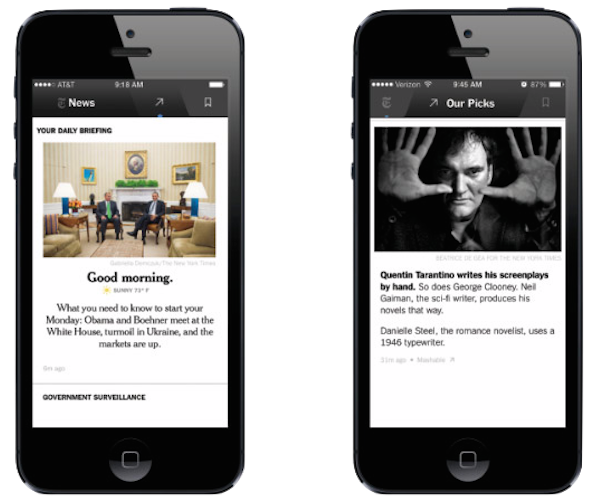 The New York Times newspaper is scheduled to launch new digital offerings on the iPhone come next Wednesday, April 2. I cancelled my digital subscription to both the Times and The Wall Street Journal a year ago due to their overpriced subscriptions and sluggish apps.

Realizing as much – and taking note of sleek looking apps such as Flipboard and Facebook’s Paper – the paper sent its digital team back to the drawing board with the goal of rethinking the company’s digital offerings and how its content should be reformatted for mobile devices.

The result of their work is a brand new iPhone application that offers staff-curated content wrapped inside a nicely done interface, called NYT Now…

According to the paper, the NYT Now app will debut on Wednesday, April 2, as an iPhone and iPod touch exclusive with the $8 per month subscription, with regular content curated for a mobile audience and targeted at light readers.

Users will be able to read ten free stories per month before hitting a paywall and current subscribers to the print NYT edition will gain NYT Now access free of charge.

The app, depicted top of post, includes regular news stories and rich media like video, info graphics, slideshows, paid posts and – yes – native ads like this one which debuted on its website earlier this year.

It’s their first standalone news product beyond the core app, depicted below. 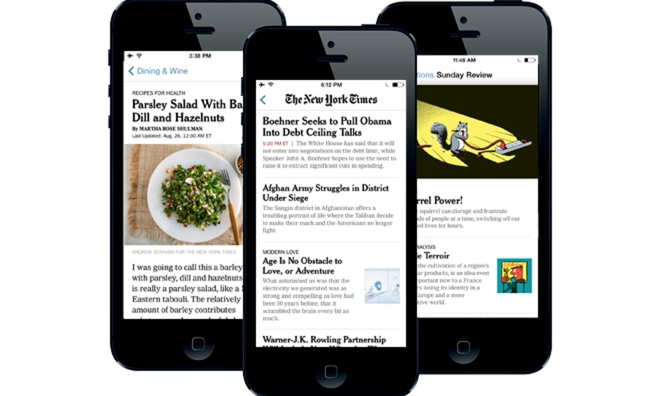 NYT Now cuts through the vast amount of content available on the web and social media to provide the most essential stories of the moment, hand-selected by some of the most thoughtful and discerning journalists in our newsroom.

NYT Now will offer a blend of articles from The Times and from other websites, as well as a morning briefing and an evening briefing summarizing the news.

A team of more than 10 editors will select the content for NYT Now, which will be only a sampling of the paper’s entire news report.

Again, content for the NYT Now app will be human-curated, instead of having computer algorithms select some stories (we’re looking at you, Yahoo News Digest!)

NYT has created another tier for news junkies.

Called Times Premier and costing $45 every four weeks, it includes all content such as Times Insider, additional crossword puzzles and more and comes with content experiences tailored to and created exclusively for Premier customers.

TBooks: Access to two free TBooks each month. TBooks are curated compilations of articles from The Times’s Archives, each on a single subject. TBooks are available for digital download to iOS, Android and Kindle devices, as well as desktops.

Crosswords: A four-pack of themed puzzles each month, handpicked for Times Premier subscribers.

Print subscribers can get Times Premier for an additional $10 every four weeks. The Premier subscription will be shareable with two family members, and includes three twelve-week all-digital-access gift subscriptions each year.

The paper said it will be launching two other apps this summer, one focused on food and the other on opinion pieces.

Since introducing a paywall on its website, the paper was able to increase its digital subscriber base to 760,000. The new apps should help boost growth, which has slowed in recent quarters.

About half of NYT’s online traffic comes from mobile devices.

Are you subscribed to any digital newspaper on your iOS device?