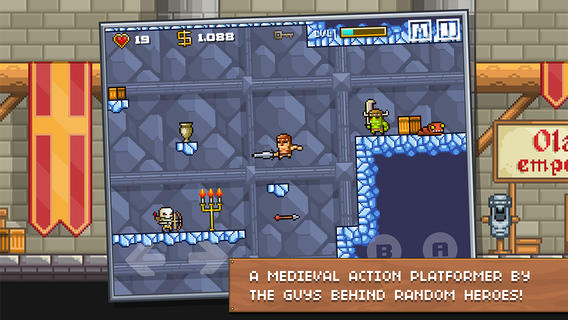 Ravenous Games have made a name for themselves with such titles as League of Evil, Beat Down, and Random Heroes (check out our review of Random Heroes 2). They’ve single-handedly made a retro style version of practically every genre in the App Store.

Devious Dungeon is the developer’s most recent addition to its pixelated collection of games. This dungeon crawler is a platform style game that is a lot like the Random Heroes franchise, but with knights and goblins instead of gun toting mercenaries…

Players fight their way through randomly generated dungeons to collect loot, find hidden keys, and earn experience points that will turn them into the toughest little warrior north of the wall (get it?). 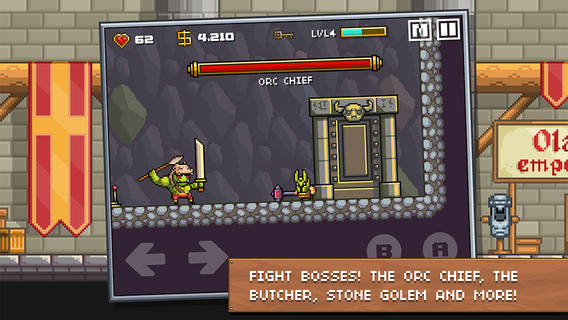 Your pixelated player must venture to the darkest corners of the catacombs to fight evil creatures that have made their home of the Kingdom’s underground. Destroy goblins, defeat demonic knights, and bring order to the underworld.

Using left and right arrows to move and “A” and “B” buttons to jump and attack, players run from one end of a dungeon to the other, fighting bad guys. Along the way, you can smash nearby furniture, like wood crates, candelabras, and decorative vases. When you destroy an item, you’ll be rewarded with a few coins.

Coins can be used at Olaf’s Caravan to buy weapons, armor, potions, trinkets and more. You can also use your winnings to receive a blessing from the priest, which gives you back lost health points. 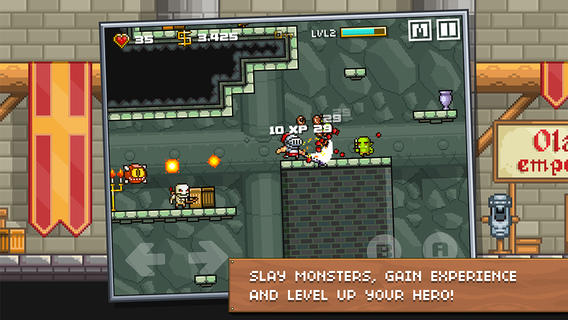 Some dungeons have secret hidden rooms that can only be discovered if you don’t try to find them. That is to say, rooms can be hidden behind false walls that you might only notice if you’ve accidentally walked into one.

In addition to goblins, grubs, and gross things that shoot fire, you’ll be faced with a bad boss every 13 levels. If you thought it was difficult to fight off the arrow-shooting skeletons while avoiding the spiky pit, you haven’t seen anything yet.

Devious Dungeon is available on the iPhone, iPad, and iPod touch for $0.99. Download it in the App Store today.

Are you a fan of Ravenous Games? Will you be investing in this platform style dungeon crawler?