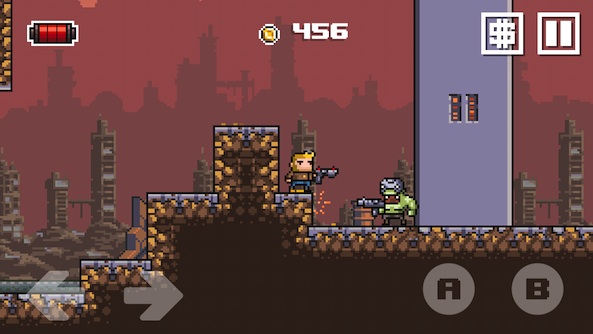 Ravenous Games has made a name for itself by launching epic side-scrolling platform games that look like they were made in 1987. With series runs of League of Evil and Random Heroes, the game development company has earned its reputation of making award winning and critically acclaimed games.

Last week, Ravenous Games launched the third installment of its League of Evil series and to celebrate, Random Heroes 2 has gone free for a limited time…

This pixelated beauty is set in an alien world where spikes drop from the sky and walls disappear to reveal secret rooms. The view is two-dimensional and your hero only moves left and right. The controls are represented by a left and right arrow and an “A” and “B” button. The A button is for firing your weapon and the B button is for jumping. You can control the angle of your gun by holding down the A button and dragging your finger or thumb upward slightly. This will cause the gun to angle upward.

The heroes come in all shapes and sizes if you can afford them. You can play as the Gentleman, Punk, Lumber Jack, Hippie, Bank Robber, and more. Each hero has a special ability. For example, the Punk can damage enemies by running into them. However, he takes damage, as well. The Alien will absorb enemy fire and gain a damage boost when shot.

There are also 22 different weapons ranging from a basic 9MM pistol to a flipping bazooka. Each hero and weapon can be upgraded, but each one costs coins. 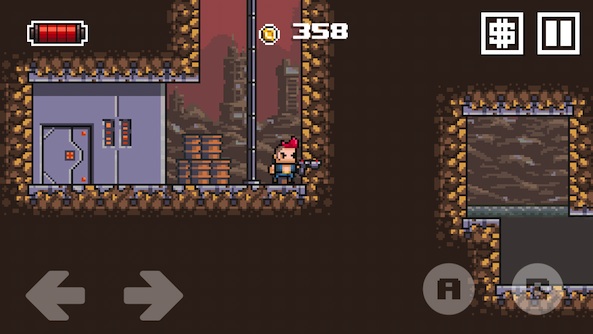 Each level includes three gold stars and at least one hidden skull. The stars are fairly easy to find, but usually difficult to get to. The skulls are often hidden in secret rooms and very hard to find.

Try to find the skulls whenever possible. They are used to let you continue the game where you left off if you die. This is invaluable since your hero has a very small health bar. Until you are able to upgrade, the heroes only have three or four hits before they die. This may seem like enough, but when you have two aliens and a laser-shooting orb coming at you, you need all the health you can get.

The goal is to find the exit. Everything that happens along the way generates extra points and coins. If you get to the exit without finding all of the stars, you can still continue.

If you don’t want to earn your coins the old-fashioned way, you can buy your way to an epic hero with an awesome weapon through in-app purchases. 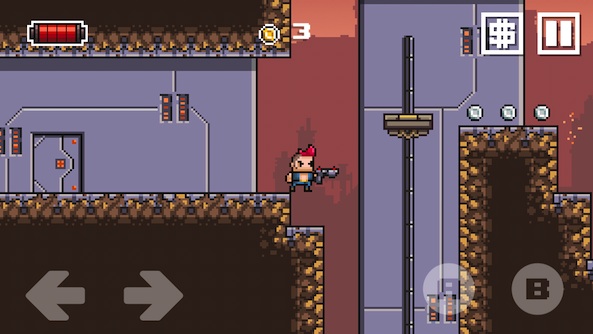 This game is pretty close to perfect for its genre. It offers all of the traditional features of a side-scrolling platformer while adding a few twenty first century extras to give you a run for your money.

As of writing this review, the game is free for a limited time (I’m not sure when the sale will end, so I apologize if it is over by the time you read this), so the value is through the roof. Even though the game offers in-app purchases, this is one of those games where you earn enough in-game money to buy everything you want and you won’t ever feel the need to spend a dime.

Fans of side-scrolling platform games, especially ones that have a retro theme with a heavy pixelated look, will get a kick out of Random Heroes 2. The gameplay is great. The characters are upgradable. The weapons are epic. You can download it on the iPhone, iPad, and iPod touch for free for a limited time.