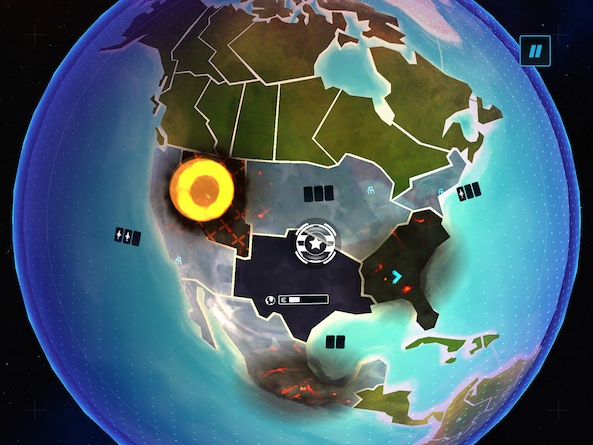 At risk starting a political debate amongst our readers, this past year or so has triggered a fear of nuclear attack that I haven’t really felt since the dying throes of the Cold War in the late 1980s. Ever since I watched Red Dawn (the original) I’ve wondered what a nuclear war would be like.

First Strike Game is a real-time strategy game that lets you act as the government power in charge of a nation that is either determined to overthrow the world, or just wants to protect the country from a nuclear attack…

The entire game takes place from outer space, looking down on Earth. Players pick a country to command and build defensive weapons, while researching and expanding. Much of the work you will do involves shoring up as many missiles as possible.

Players view different countries by pinching to zoom in or out and dragging a finger to rotate the globe. To perform an action, like building a rocket or expanding, tap a country. Then, select the action from the available options.

If you are going to research something, like missile warfare or recon abilities, you will be taken to a new screen that will offer you four branches, each with a set of possible research options.

When you attack another country, your missile will take off from the country you launched it from. You can track it all the way to its destination and either watch it destroy an area of land, or watch as the enemy destroys it in mid air. 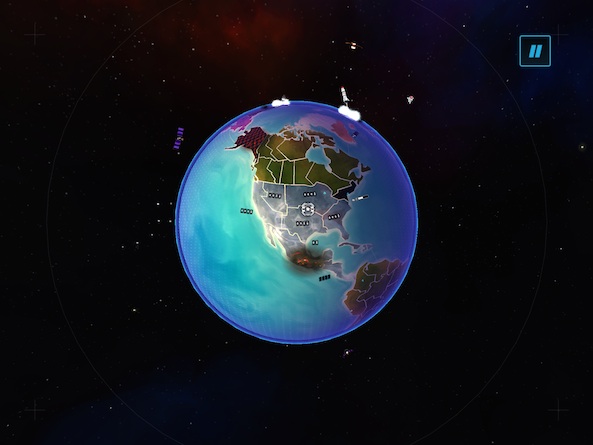 The goal of the game is to destroy all enemies and expand as far as possible. The superpower that stays alive and does not surrender, wins.

Getting to that point is much harder than you might think. First, players must build an arsenal of nuclear weapons from three different types. When you first start, there will only be two. Each missile takes a different amount of time to build and has a different reach. That is, its distance to impact.

To see the distance a missile can reach, tap to attack and then check the reach line, which is a yellow line surrounding the globe a certain distance from your origin point. If you can reach your destination, tap it to set a target. Then confirm by tapping a second time. Your missile will launch and head toward its target.

After you launch a missile, the region you sent it from will be locked down for a period of time. During the lockdown, that area cannot attack, defend, build, research, or expand. You can still protect the country using another region, as long as there are missiles available and the regions are not also locked down.

There are two different categories of missiles; defensive and offensive. Be sure to stock up on small cruise missiles in order to be properly defended against attack, which will happen a lot.

The other missiles are nuclear assault rockets, which players use to attack other nations. Use these to destroy your enemy and invade countries you can’t expand into diplomatically.

In addition annihilating your foes, it is important to expand. When you do, you will increase your chances of overthrowing enemy forces. The more territory you have, the more weapons you can acquire.

To expand, tap your territory. Then tap “Expand.” Available regions will appear. Tap one and wait for the expansion to complete. You can only expand into neutral or destroyed areas.

The next part of your plan to become the biggest superpower is research. This will allow you to increase your performance in the game by learning about weaponry, intelligence, efficiency or capacity. For example, if you research intelligence, you will be able to have advanced warning when a missile is approaching. Researching weaponry will unlock the third missile.

To research, tap one of your territories. Then tap “Research.” When the research window appears, select from the available options and wait for the research to complete. Every nation in your alliance will benefit from research.

The last available strategy in this game is First Strike, which the game is named for. When you have at least nine missiles, you can call a First Strike on an opposing nation. This will trigger every nation in your alliance to fire a missile into a selected area.

Once you’ve won the game twice, you will unlock additional superpowers that you can play and will be able to increase the computer opponents you play against to 10. 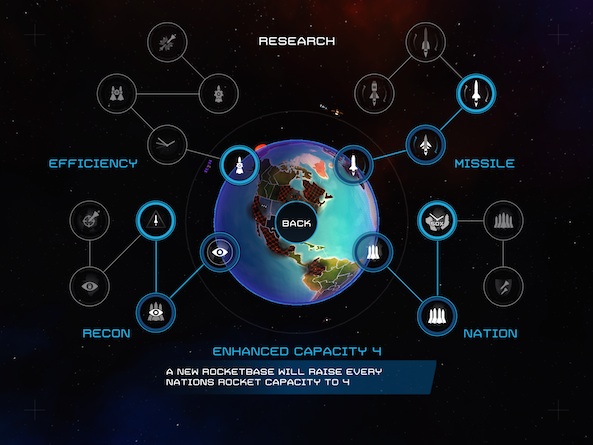 The graphics are very clean. The game plays out in real time. So, you might be in the middle of researching something when an enemy’s rocket appears. You can zoom in or out and watch nations attack each other, as well.

I like the game’s mechanics. This is a well-made version of the real-time strategy war game genre.

I noted a couple of bugs, like some territories not being accessible at times, and the research branches not working properly.

Additionally, there are some game mechanics that I don’t understand, like why I can defend one territory with another sometimes, but not every time. I’d like a rulebook that explains the details better.

This game is not multiplayer supported in anyway. It desperately needs Game Center multiplayer connectivity.

First Strike Game costs $3.99. This game could have sold at $5.99. The price tag includes the entire game with no in-app purchases of any kind. The replay value is through the roof, since every experience is different. Even without multiplayer, you will come back over and over again.

Fans of real-time strategy games will love this title. It offers plenty of planning, building, research, and expansion options. The graphics help make the game exciting. You can watch your nuclear missiles destroy a region. The price is reasonable for a game of this caliber. I recommend it for fans of the genre. This game is only available on the iPad. Download it in the App Store today.

This game reminds me a lot of Plague Inc. only with superpower nations instead of diseases.

What do you think of First Strike Game?