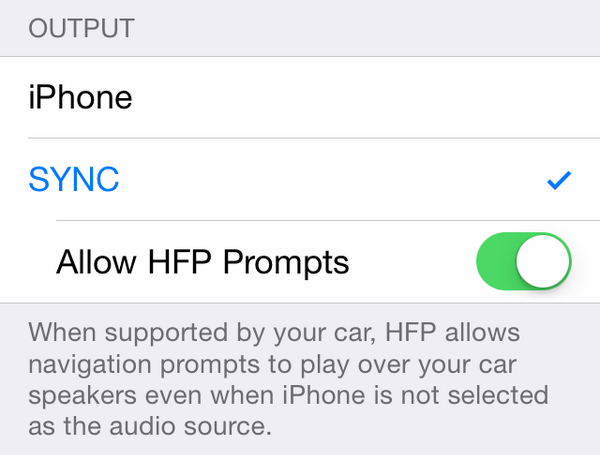 Apple has delivered iOS 7.1 yesterday, its first major iOS update since the software’s launch nearly six months ago. We’ve already detailed some of the noteworthy enhancements like Touch ID reliability improvements, new Siri features, CarPlay support, a bunch of bug fixes – some of which have been credited to prominent iOS hackers like the evad3rs team – and more.

According to developer Mike Piontek, Maps in iOS 7.1 includes a poorly labeled new feature called HFP Prompts which allows the app to play navigation prompts over your car’s speakers, via Bluetooth, even when the iPhone is not selected as the audio source. It’s a great addition to Apple’s in-car initiative because no longer do you have to fiddle with audio settings as HFP Prompts automatically does the right thing for you.

Jump past the fold for the full breakdown…

The switch to enable HFP Prompts is available in the Maps app, but only if you’re connected to your car’s stereo via Bluetooth. Simply open Maps start a route and tap the audio button in the bottom right. A panel will pop up with Volume settings for Navigation Voice and the Output section with the HFP Prompts switch right below.

As can be seen on the below screenshot, you can choose between listening to your navigation prompts on the device itself or route audio through your in-car’s Bluetooth stereo. Again, you have to be connected to Bluetooth and navigating or else HFP Prompts won’t be available.

The feature is dependent on your car’s model and its software support.

“When supported by your car, HFP allows navigation prompts to play over you car speakers even when iPhone is not selected as the audio source,” explains Apple. 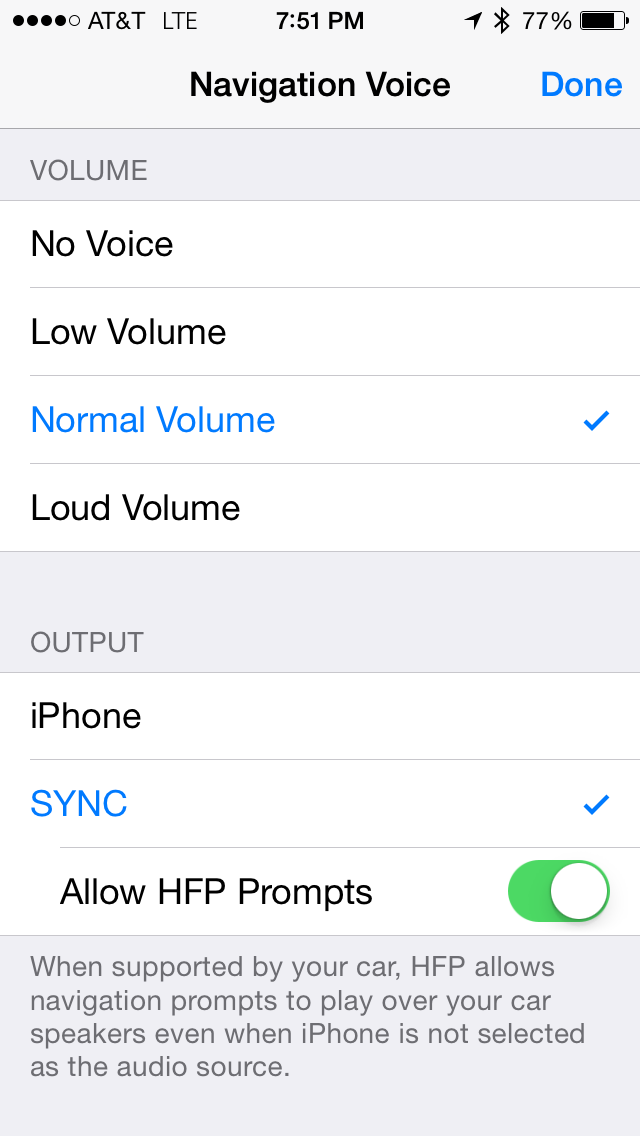 Well, it’s like receiving a phone call through your car’s Bluetooth system: the feature basically tells your car to connect to your device over Bluetooth whenever a voice direction needs to be played.

As a result, you can listen to music or radio stations through your car’s built-in audio system and at the same time hear spoken directions, which is really nice. So if you’re listening to FM radio, navigation prompts now automatically interrupt and play just like an incoming phone would.

This poster on MacRumors’ forums has confirmed that audible navigation prompts work on his Honda Accord’s Bluetooth audio system, after a Siri Eyes Free update on the car’s audio.

Previously, your device could only play navigation prompts if you switched your car’s stereo to the Bluetooth input, which in turn stopped music playback from the CD/MP3 player, FM tuner or any other audio source.

It’s interesting that Apple’s official changelog for iOS 7.1 makes no mention of HFP Prompts in iOS 7.1, despite the feature’s usefulness.

Speaking of Maps, Mark Gurman of 9to5Mac reported this morning that not only does Apple Maps in iOS 8 include more reliable data, it also features augmented-reality capability for finding points of interest, public transit directions and more.

As a reminder, jailbreakers should stay away from iOS 7.1 because it’ll kill your jailbreak and you won’t be able to downgrade.

What do you think of the HFP Prompts feature?

Isn’t it one of the most useful new features in iOS 7.1?