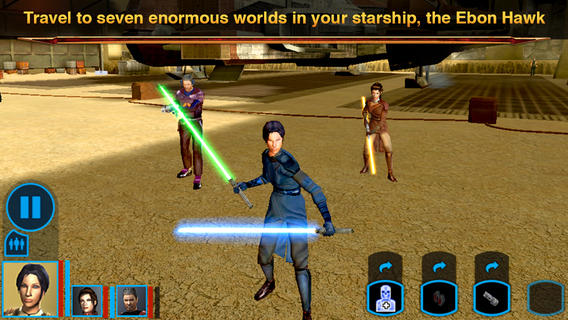 Mac games developer Aspyr released Star Wars: Knights of the Old Republic (KOTOR) for iPad last May and today the app has received its second major update while slashing the retail price in half. Previously costing ten bucks a pop, the game is now available 50 percent off celebrating this update, or just $4.99 a pop in the App Store. The price drop is valid for a limited time only so bargain hunters should grab the game now before the price goes back up.

As for the new features, the freshly updated versions has an improved support for iOS 7 ‘Made for iPhone’ controllers, such as Steel’s Series Stratus, Moga’s Ace Power Controller and Logitech’s PowerShell. Both extended and standard controllers are fully supported. There are also new languages in this KOTOR update as well as iCloud saves for keeping your progress synchronized across all devices…

KOTOR version 1.2 has a new game-saving option allowing you to move your saved game across different iOS devices using iCloud. Also, localizations and subtitles have been added for French, Italian, German and Spanish.

The continued love for Star Wars: Knights of the Old Republic from players around the world has been nothing short of amazing.

We’re excited to offer an update that rewards the game’s international fans and allows KOTOR players to not only play the game just as they remember it, but to allow them increased flexibility to play where they want.

Download Star Wars: KOTOR in the App Store for $4.99 for a limited time.

The game supports an iPhone, iPod touch and iPad running iOS 6.0 or later.

The Mac edition can be purchased from the Mac App Store for $9.99.