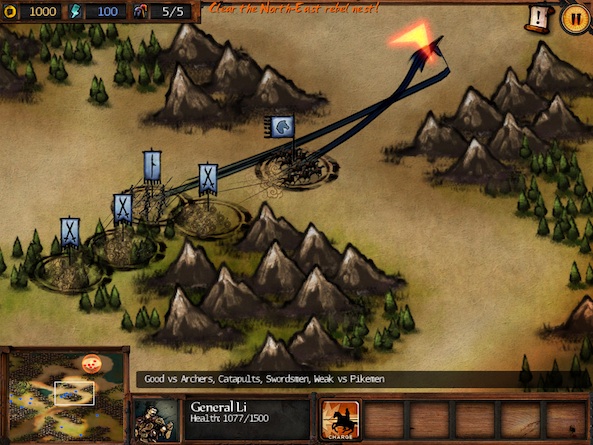 Real-time strategy games on iOS are some of my favorites. They remind me of Risk, which I played regularly as a kid with my older brother, who was not the least bit merciful of my three less years on the earth than him. Maybe his take-no-prisoners attitude when playing strategy board games has led me to the life of a game reviewer. Maybe he was just a big old meany.

Autumn Dynasty – RTS is a strategy game that lets you draw where you want to send your troops by making circles and lines on the screen. Dragging your finger has never created so much destruction…

The game has a familiar anime style storyline. Characters look like they may have been part of a period piece war cartoon in the mid-1990s. Players follow the story of a scholar who reluctantly becomes the leader of a faction that is constantly battling a never-ending supply of foes.

Between battles, players are presented with still frames of characters speaking together on future plans. This moves the plot forward and explains why the battle is taking place. During the fighting, the playfield is revealed and players track their troops. The view is from above and players can zoom in or out to see the action that is taking place on the map.

At the bottom of the screen, the currently selected troop or building will be displayed with relevant information. For example, if you select the enemy’s Archer troop, you will note that they are good against swordsmen and Pikemen, but weak against Horsemen. When you select your own troops, you will see how much health they have, what their special abilities are, and what actions they can perform. When you select the Fort, you will see troops that can be trained and what is currently on the list to be added to your command.

There is also a smaller mini map in the bottom left of the screen that shows you points of interest, like where the enemies are hiding and how to find your base camp.

During the game, there isn’t much music. However, you will hear the battle horn, calling troops to fight, the sound of horses crying, and metal swords clashing together. 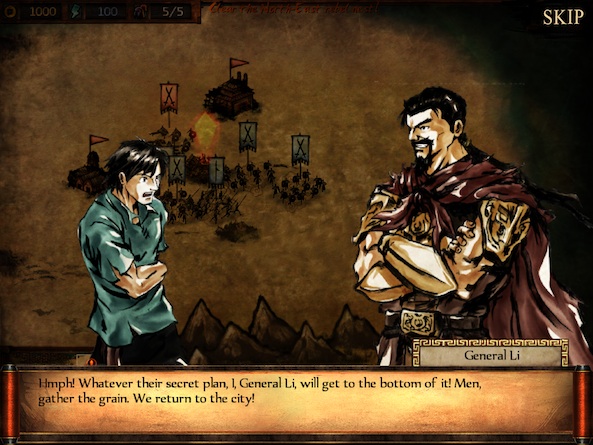 Players launch troops into battle by either tapping one group or by drawing a circle around an entire group. Then, drag your finger from the troop to the location you wish to send them. The troops will march down the path until confronted by an enemy. They will fight their foes until all are dead and then continue along the path to complete your marching orders.

There are four different types of troops, Swordsmen, Pikemen, Archers, and Horsemen, as well as a Catapult that players can deploy into battle. Depending on how many camps you have built you can only have a limited number of troops. Each location offers a different mission for players to complete. In one, the goal is to escort an unarmed official through enemy territory. In another, players must track down the enemy’s catapult to stop it from firing.

The game is heavily based on strategy. Players must decide whom to send into battle based on strength and weakness, as well as available resources. As the game progresses, players will be able to research stratagems that will allow their troops to learn more powerful attacks. Players can also build new encampments on the remnants of the their enemy’s burned down buildings.

I haven’t had a chance to play this game for very long, but I can tell that it is an epic title with plenty of strategy-based planning and attacking involved. It will be on my iPad for a very long time. 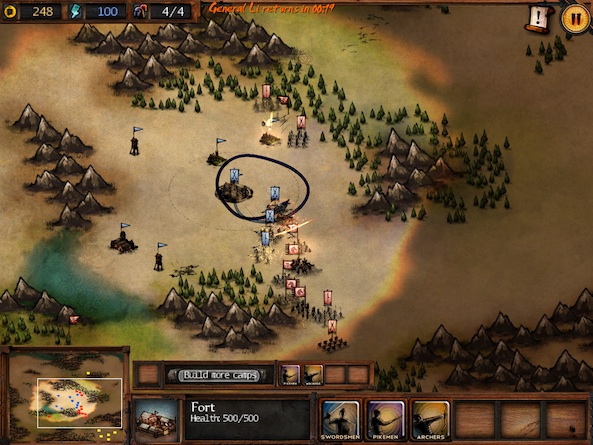 The game’s story is deeply involving, making the battles more important and epic. The graphics are stunning and make the game seem nearly real. These tiny troops fight like highly trained warriors and you can see how they fair against each other by zooming in close on the battle.

I would like a few more tips on what the troops are capable of. I didn’t realize the Horsemen could set an entire forest ablaze until I accidentally did it while trying to light up the enemies. There is a “War Manual” that you can email to yourself, but it is not available inside the app.

Autumn Dynasty is free until February 26. The game will then revert to its original cost of $6.99. There is no better price than free, so get it while you can. At full price, this game is a great buy for fans of the genre, but may be too steep for players interested in trying something new.

Fans of real-time strategy games will have a hard time putting this down. It is beautifully designed and has lots of amazing features that I still haven’t had a chance to try out, including voice chat for multiplayer games. If you don’t know anything about the RTS genre and want to see what they are all about, grab this universal game while it is free. Download it in the App Store today.

Machines at War 3 is a sci-fi based RTS. Starfront – Collision puts troops into battle right in outer space.