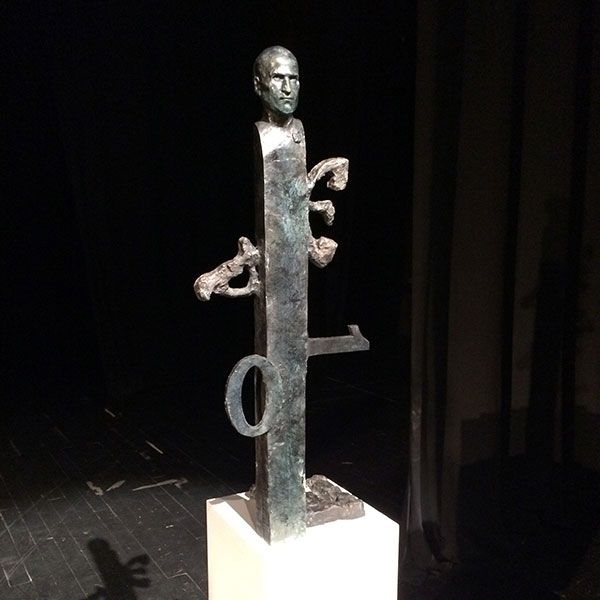 A rather interesting statue honoring Steve Jobs was unveiled in Belgrade, Serbia today by famed sculptor Dragan Radenovic. The work is the result of an art competition that saw more than 10,000 entries and will end up in Apple’s Cupertino headquarters.

The statue, which has been garnering mixed feedback as the story bounced around the web today, features Jobs’ head along with the Latin letter A and the binary digits one and zero. It also features a pair of Serbian letters: E, and then III rests at the bottom…
MacRumors has translated the sculptors’ comments:

I wanted to present some of the recognizable Serbian motifs such as a letter Ш which is the last letter of the Serbian alphabet and Apple rather liked the idea. I’ve also placed the Latin letter A and binary code 0.1 too. I’ve wanted it all to represent a sort of “magnet”.

The piece you see above is actually a smaller model, for demonstration purposes, of what the final version of the statue is going to look like. The final version will be roughly 3 to 5 meters in height—or 10 to 16 feet—and will be shipped to Cupertino upon completion.

According to the report in the Serbian press, Radenovic sent sketches of the statue to Apple executives who said they really liked the sculpture and “the imperfections of his work.” In fact, he’s heading to Apple HQ next month to discuss the final version of the piece.

Steve Jobs has been honored in a number of ways posthumously since he passed away in 2011. Most recently, it was announced that he was to receive his own commemorative US postage stamp next year.

So, what do you think of this unique statue?