After releasing seven beta builds of the upcoming OS X 10.9.2 update to its registered Mac developers, Apple appears to be putting finishing touches on this highly anticipated second Mavericks update. A pre-release build of OS X Mavericks version 10.9.2 is now in circulation among a small group of Apple employees, indicating that a public release is around the corner. The OS X 10.9.2 update will (hopefully) fix Mail bugs while enabling greater feature parity between iOS 7 and Mavericks.

The latter entails enabling FaceTime Audio calling on the Mac and giving users the ability to block individual senders through the Messages app. Both of these features are supported in Apple’s mobile operating system.

The software will also fix dozens of bugs and bring useful tweaks and under-the-hood improvements, all listed below the fold…

According to AppleInsider which talked to “people familiar with the matter,” the pre-release version of 10.9.2 carries a build number of 13C64, indicating a slightly newer build versus the last beta.

In addition to security fixes, you’ll be able to make and receive FaceTime audio calls and block incoming iMessages from individual senders in the Messages app. 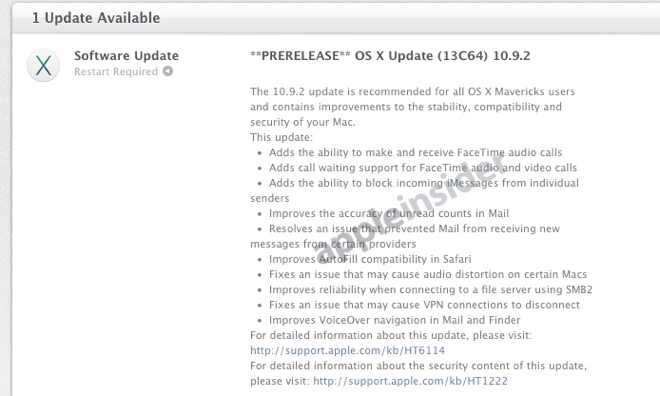 Among other fixes and changes included in 10.9.2:

Internal release notes provided to employees also indicate that the update improves the accuracy of unread messages counts in Mail. The update is also expected to resolve an issue that would prevent Mail from receiving new messages from certain providers.

Changelog makes no mention of a fix for the ugly SSL exploit which was fixed in iOS 7.0.6. Apple on its part confirmed that a fix for the OS X issue will arrive “very soon,” likely as a quick fix separate of 10.9.2.

We will be keeping you in the loop in terms of the software’s release and let you know as soon as it becomes available through the Mac App Store.