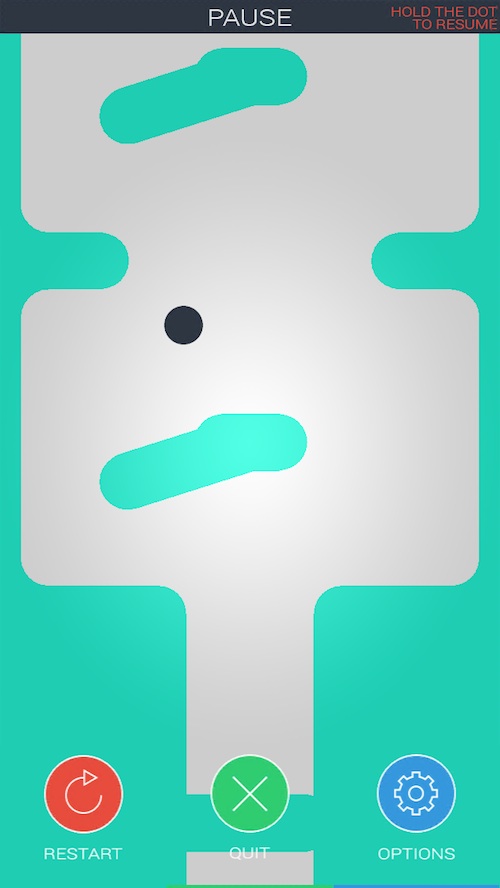 There are hundreds, if not thousands of “endless runner” games in the App Store. So many now that, when I see the term, I usually groan and pass it by. However, from time to time, a unique take on the game will come along and surprise me.

On the Line is one of those little surprises. It is called an endless runner, and I suppose in its most technical terms, it is, but this game is anything but typical. There are no coins, no bonus items, and no character. Your finger is the runner…

Fans of minimalism will appreciate the look of this game. It has a solid colored background and a white, windy path. It is important to note that this game is not Retina display optimized. It does not detract from the enjoyment of the gameplay, and the graphics are so minimalistic that it is barely discernible. However, I know there are some Retina-philes out there who won’t touch a game if it isn’t Retina display optimized. I wouldn’t want to mislead anyone.

When you complete an objective, the color of the background will change. You can choose any color from the options menu once you’ve unlocked it by completing an objective.

When you “cross the line” or touch the edge, the screen will gray out and you will see a message that reads, “you failed here” with a dot next to the spot on the path were you touched the edge.

After you start “running” you can pause the game by lifting your finger from the screen. When you do, a dot will appear that represents the exact spot you lifted your finger. To continue the game, place your finger on the dot and hold it for three seconds.

There really isn’t much else to it. When you pause the game, you will see three buttons at the bottom of the screen. You can restart the game, quit the game, or adjust the game’s settings by turning off the music or sound effects, which is a good thing because I couldn’t stand the music. 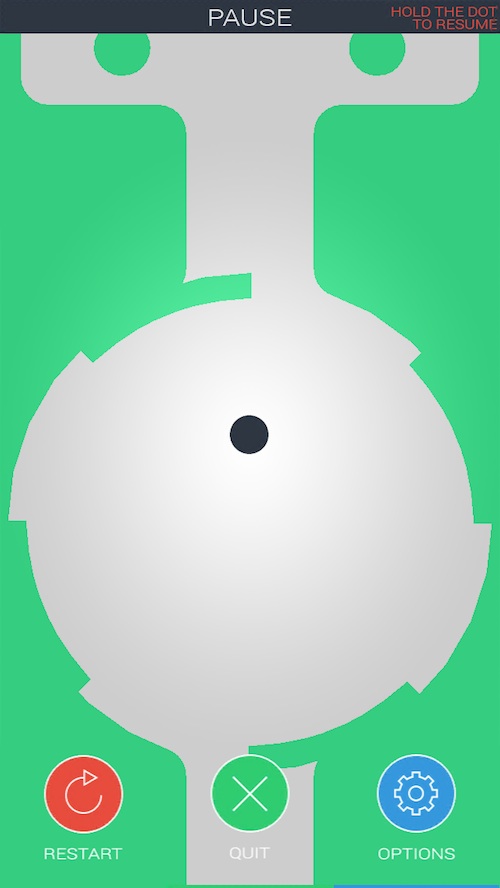 The goal of the game is to run the farthest. You don’t score points. However, you do earn achievements for completing objectives by reaching a certain distance in a single game, and reaching an overall distance for the entire time you play.

To start, place your finger on the dot at the center of the white path. The screen will begin to scroll upward vertically. The beginning of the game is excruciatingly slow. The screen moves about one centimeter per second. However, once the pace starts to pick up, you will be wishing it would slow down.

The path gets more and more windy as you move along. There are also obstacles, like moving walls and bouncing balls, which make it harder for you to avoid crossing the line. However, with the right timing, you will be able to outpace the obstacles.

The trick is not to move your finger upward, but to let the path come to you. When I first started playing, I would race up the path with my finger so that I’d be at the top of the screen. I wouldn’t be able to see what was coming and would accidentally run into a wall. By keeping you finger mostly centered, you will have room to either back up or move forward quickly when the situation calls for it.

You will collect distance every time you play. So, even if you only make it 20 cm, that amount will be added to your total distance meter. When you fill the meter, you will move onto the next objective.

For example, the first objective is Stonehenge. When you fill the distance meter of 670 cm, the color of the screen will change and you will see the new distance objective.

The game has two modes, Classic and Hardcore. Hardcore mode is unlocked once you’ve completed the first distance objective. Personally, I prefer playing the game in Hardcore mode because you start off much faster. In Classic mode, the game drags on for the first 30 seconds or so while the pace picks up. However, it would be smart to start off in Classic and then switch to Hardcore after you’ve played a few rounds. Your game will pick up with the same distances and achievements when you switch between the two modes. You don’t lose any game progress 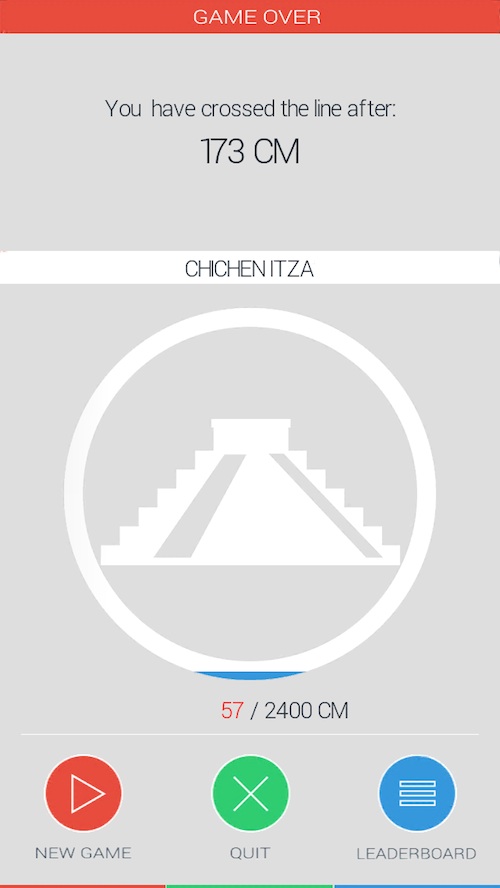 Even though this game is very simple, it is a lot of fun. You’d be surprised how difficult it is to get past 250 cm. When the speed picks up, it is very hard to keep up. I even switched from using my finger to using a stylus to see if that would help. The game moves so fast that it is nearly impossible to avoid crossing the line.

Sometimes it seems like my finger would touch the edge or cross the line and nothing would happen. I’m not sure how the game senses movement, but it might not be very exact.

On The Line costs $0.99, which is just right for a game in this genre. There are 10 mazes and each one is harder than the last. Plus, the distance meter increases significantly for each maze, so it takes longer to complete it. For example, Stonehenge only needs 670 cm, while Chichen Itza needs 2,400 cm. Don’t worry, you’ll be playing for a long, long time.

If you don’t like endless runner games, don’t be turned off by this one. Even though it follows the same basic premise, it is completely different than the endless runner clones that flood the App Store. The game is challenging once you get past the first objective and Hardcore mode makes it even more exciting. It only costs a dollar and it will waste your time. I mean that in a good way. This game is available on the iPhone, iPad, and iPod touch. Download it in the App Store today.

Impossible Road is another minimalistic runner game that presents a challenge. Did you know there was a Die Hard-themed endless runner game?