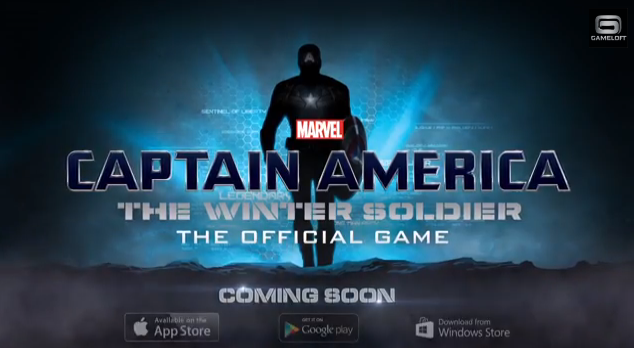 Gameloft and Marvel announced the official tie-in game for the upcoming Captain America sequel this morning. It’s called ‘Captain America: The Winter Soldier’ and it will be arriving on iOS, Android and Windows Phone platforms this spring.

We don’t know much about the game, outside of its title. But judging by this trailer Gameloft posted this afternoon, it’s not going to be your typical hack-and-slash marketing vehicle, as it features Borderlands-style graphics and unique gameplay…

Here’s the clip, which features some gameplay footage:

As I said before, the game’s graphics remind me of a Borderlands or Crackdown-like game; sort of cartoonish. That can be a good or bad thing, depending on your preferences, but (again) I think it sort of sets the game apart from other tie-in titles.

What about the storyline? From Gameloft’s press release:

“Fans will enjoy taking the role of Captain America and leading an elite team of S.H.I.E.L.D. agents in battle against famous Marvel villains involved in a sinister global plot. Complete with the ability to join clans in multiplayer mode and to compete for a higher position in leagues, gamers will enjoy hours of entertainment in a unique comic-book-style world. An original story inspired by the film, co-written by Marvel, provides a gripping narrative for the game.”

Unfortunately, the game will probably be of the free-to-play variety. But it’s worth noting that Gameloft has been a Marvel partner for a long time and has produced a number of successful mobile games under the franchise, so it knows what it’s doing.

Captain America: The Winter Soldier is expected to hit theaters in Europe on March 26th, and in the United States on April 4th. So expect the game to land on the iPhone, iPad and iPod touch around that time, or possibly sooner if the studio sees fit.