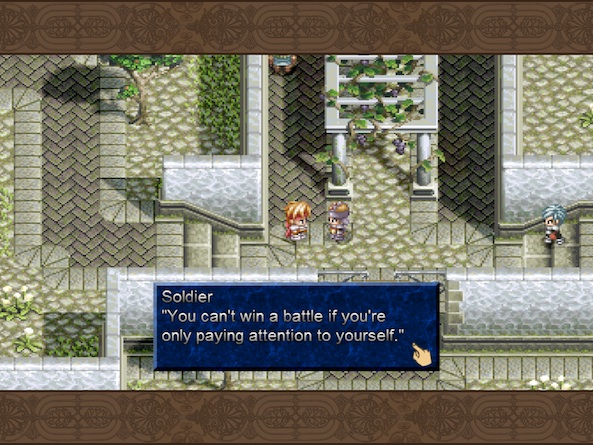 Nearly two decades ago, Namco launched a fun little role-playing game that incorporated traditional plot-heavy story development with real-time battle engagement. By 2006, the title made it to the U.S. where it generated a small, but fierce following.

The English version of Tales of Phantasia finally launched in the App Store last week. It has garnered praise for existing on Apple’s mobile platform, while simultaneously being cursed for its free-to-play format. Fans of the original are raging about having to pay in game for a free download, instead of paying full price up-front. What where they thinking?…

The game definitely looks its age. That is a good thing in my opinion. There are gamers out there who believe that epic graphics are the only thing that make a game worth playing. I disagree wholeheartedly. When done correctly, pixel-heavy graphics add a level of charm that reminds me of working during college, when I spent hours playing video games on my Nintendo DS. Those were the days.

Tales of Phantasia recreates that charm perfectly, if only for the fact that the game is decades old. The graphics are pixelated. The soundtrack is pretty cool (I’m already hooked on the music). The story is engrossing.

I’ve never played ToP before, so I do not have a frame of reference to compare the iOS port. So, I’ll say what I think of the game, unfettered by obsessive fandom.

The game opens with a short cinema graphic and a quick battle that players watch. Then, the story begins. Players see everything from a third-person angle. The map exploration part of the game is multi angled, while the battles are side-view only. You can enter most houses in villages and speak with just about every non-player character (NPC) on the map. Battles are triggered when you walk into an enemy’s territory. You won’t know it ahead of time. The screen will just start swirling and you will find yourself in battle mode.

To move, you can either tap the ground in the spot you wish to move, or use the virtual joystick, which appears when you touch the screen. Tapping to move will jet you across the screen super fast. The joystick works fast or slow, depending on how far you “push” it.

Battle moves are gesture based. Instead of using buttons to attack, players tap different portions of the battle screen. For example, tap the upper zone to thrust, the middle zone for air attack, and the lower zone to slash the enemy. Players can use different characters’ skills by flicking left or right inside the battle zone. Flick up or down to reverse the order of character controls and stop all members from moving. 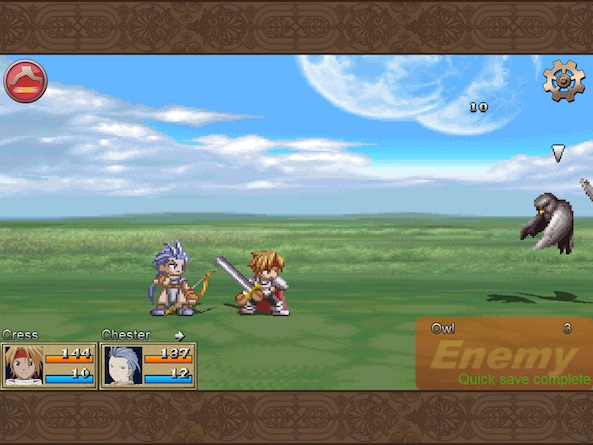 As I mentioned above, I’ve never played the game prior to this version. I have no gauge for its difficulty or playability compared to the Nintendo DS version, or any other, for that matter. That being said, this game is way too hard. The enemies, even at the very beginning of the game, seem to be supercharged. It takes multiple hits (like, at least 6 or 7) to kill one enemy and most battles include at least three, sometimes four bad guys. Your reward for your effort is usually some bits of food, nothing particularly worthy of your hard work, though. Especially when your battle nearly cost you your life.

The game starts you off with a sort of test battle. You leave the village to hunt for boar. In the wild, you will improve your skills by killing bees, bugbears, dingos, and more. You will eventually fight a fierce boar that will definitely kill you. That’s ok. You are supposed to die so you can use the special Resurrection Orb, which revives you, mid-battle, so you can continue the fight from where you left off with buffs and added bonuses.

The Resurrection Orb is one of many items you can purchase in the in-game store for $1.99. Of course, you don’t have to buy them, but they sure don’t hurt when you are trying to kill a very difficult boss.

Between fighting and exploring, players are treated to a very engrossing storyline of a boy with a pendant and his epic quest to save the world. I’ve only made it to the aqueducts so far, so I don’t know how much more difficult the game gets as you go on. I can only imagine it gets worse.

It has been noted by much complaining from users that this game is nothing but a money-grubbing trick on the part of NamcoBandi Games, so I thought I would address the issue now, with no bias based on the original version.

First of all, some people complain that you can’t save the game very often. From what I can tell, the game auto saves on a regular basis. So, if you are killed in battle, you will only have to backtrack a short distance. All of your inventory and hit point stats will be used from the most recent save point. It’s not that big of a deal.

Additionally, users are complaining about online-only gameplay. Yes, this is true. You must be connected to Wi-Fi or a data network so the game will auto save. It is also how you purchase things from the store. It is somewhat annoying that you can’t take this game with you on the go without worrying about eating up your data minutes. I don’t know why they would do that.

Another big complaint has been that, it appears the game has been set to hard mode only. In other words, you can’t change the difficulty level, and it is very hard. I agree with this. I’ve never played the original, but I can attest to the fact that, in this game, it is very hard to kill a group of clay demons and bats with very little weapons and shielding.

That being said, most people love a challenge and prefer playing games that are hard. Why would it be any different with this one? As long as you can replay from the most recent save, which you can, it shouldn’t be a problem that bosses are hard to beat.

Now, I can see why fans of the original are up in arms about this free-to-play version. It must be frustrating to be forced to play a game on hard mode when you beat it 8 years ago on easy. It probably would have been smarter for the company to launch this title as a full priced game and let people complain about how expensive it is, instead. 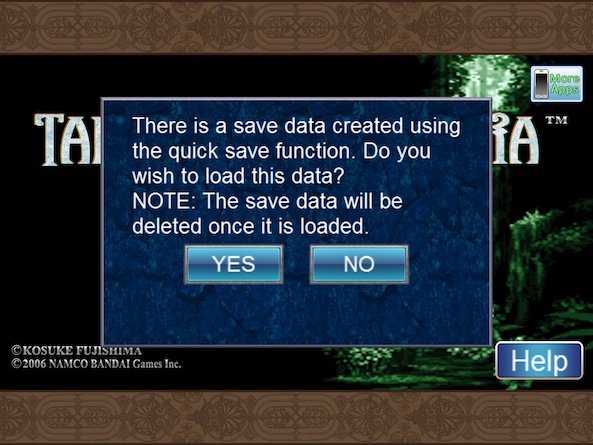 I love playing this game. It totally reminds me of sitting at work, mindlessly wasting away the hours with my Nintendo DS (which I still have), playing handheld role-playing adventure games. ToP really fills my heart with nostalgic feelings.

The story is riveting. I hope I can actually get through the game. I’d love to find out what happens at the end (don’t spoil it for me, fanboys!).

There is no reason this game should be online-only. I noted a few times when the connection was slow and my continued game wouldn’t load properly. I’d have to reload it a second time.

I assume the game was made to be so hard so you would want to pay for in-game items. However, I do wish it were just a bit easier. It would be nice if the dropped items generated a few more hit points or something.

Tales of Phantasia is free to download. I have a feeling that there will be a time soon when some super fan will brag about being able to complete the entire game without needing to buy anything. However, it is hard enough that the average gamer will not be so lucky. If the beginning of the game is representative of the rest of it, you will probably have to spend money to upgrade your gear in order to kill off the first big boss. It is free to play, though. What did you expect?

I recommend this game to players who have never heard of Tales of Phantasia. With no preconceived notions about the game, I loved it. I will definitely continue playing until it gets too hard. I do not, however, recommend this game to fans of the original. It will probably just make you angry. You can download it in the App Store today.

There are dozens (probably even hundreds) of similar games in the App Store. One popular one that comes to mind is RPG Aeon Avenger. Nimble Quest is another.

Have you played ToP before? Do you think you’ll give this f2p version a try?