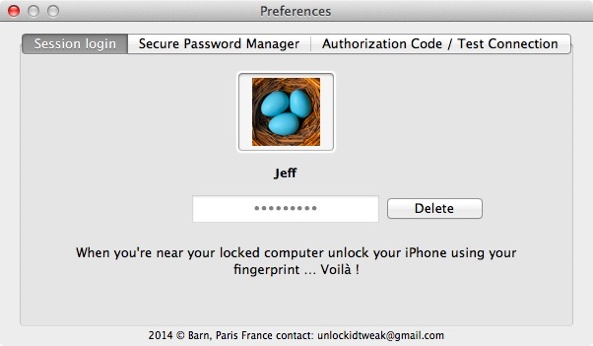 UnlockID is a super-cool new jailbreak tweak that does exactly what the headline says—it allows you to unlock your Mac using the Touch ID sensor found on the iPhone 5s. Using Bluetooth Low Energy, the tweak features a Mac component that allows your iPhone 5s to communicate with your OS X installation.

Although the tweak’s practicality may be up for debate, there’s no debating the fact that this is one of the most innovate and coolest looking Touch ID tweaks we’ve seen thus far. We’ve taken UnlockID for a thorough walkthrough. Check out our hands-on video after the break.

First and foremost, you will need an iPhone 5s in order to use this tweak, because it relies exclusively on the Touch ID fingerprint sensor found only on that device. Once you install UnlockID, you’ll be given a link to install the Mac component needed to communicate with the iPhone.

The iOS portion of the setup includes a preference panel for UnlockID, which includes a kill switch for quickly disabling the tweak. You’ll also find detailed compatibility info for OS X, a link to the Mac utility, and a section for changing the authorization code used to talk with the Mac. 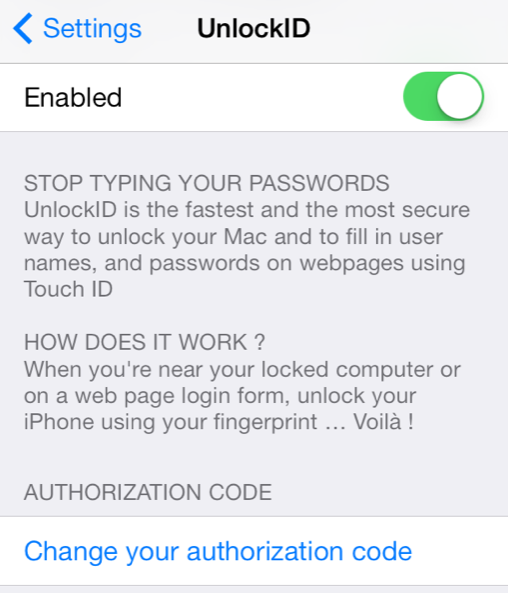 The Mac portion of UnlockID is basically a little menu bar utility that runs in the background and listens using Bluetooth Low Energy. With that in mind, you’ll need to make sure that you have Bluetooth enabled on both your Mac and your iPhone 5s.

In the preferences of the menu bar utility on your Mac, you’ll find a tab for establishing the initial connection between the two devices. This is done by generating a passcode on the Mac, and typing that passcode on the iPhone. The setup is super-simple and only takes a few seconds of you time. 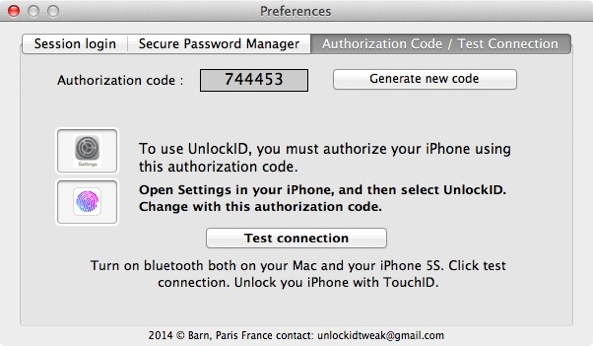 Once the connection between the two devices is established, lock your Mac, and hold a valid finger on the Touch ID sensor. Your Mac should unlock shortly thereafter. If you use an invalid fingerprint, your Mac’s login window will shake to indicate an invalid attempt. The nice thing about UnlockID is that you don’t have to be on the iPhone’s Lock screen in order to unlock your Mac; you can be anywhere on the iPhone and still use the Touch ID sensor to unlock your Mac.

The unlocking experience happens fairly quickly, probably just as fast, or perhaps a bit faster than manually typing in your password with the keyboard. Ultimately, you’re not going to save a lot of time using UnlockID, unless you have some behemoth of a password. But UnlockID is not really about saving time. This is a tweak provides an interesting look into the future, when all Apple created devices that use passwords will come equipped with a Touch ID sensor.

UnlockID includes a separate component in the Mac utility’s preferences for managing passwords on websites. In other words, you can, in theory, login to websites on your Mac using Touch ID validation. I tried this, but wasn’t able to get it to work very successfully. Not only that, but it doesn’t appear to work with websites that don’t use the .com top level domain, which makes it a deal-breaker for many sites that I visit. For that reason, I look at this aspect of the tweak as more of a bonus feature, not the real meat and potatoes of the experience. Besides, most of you probably already use some sort of password manager that’s a lot better than what UnlockID offers. 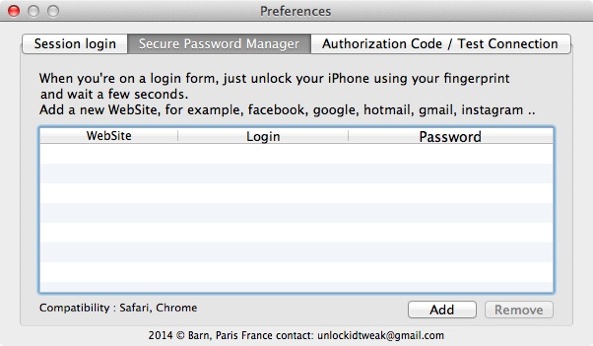 As one of the most innovative jailbreak tweaks of the iOS 7 era, UnlockID is a release that everyone with the proper hardware should try. The secure password managing portion of the tweak is its primary shortfall, but everything else about UnlockID is solid. The bottom line is that this tweak isn’t going to save you a whole lot of time, but it’s good to show off to your friends, and a nice, if not a slightly bit cumbersome way to mate Touch ID with OS X. It’s a surefire glimpse into what the future holds for the Mac.

You can find UnlockID on Cydia’s ModMyi repo for $2.99. Let me know what you think about the tweak in the comment section below.