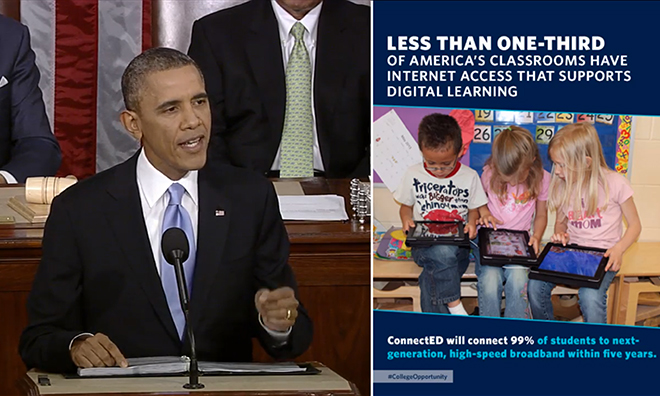 Apple, along with other Silicon Valley titans such as Microsoft and carriers like Verizon and Sprint, is going to work with the United States government to help connect schools on America with high-speed broadband Internet. The Obama administration wants to connect as much as 99 percent of schools to high-speed Internet over the next four years and companies like Apple should help advance that effort…

From Obama’s State of the Union address:

Last year, I also pledged to connect 99 percent of our students to high-speed broadband over the next four years. Tonight, I can announce that with the support of the FCC and companies like Apple, Microsoft, Sprint, and Verizon, we’ve got a down payment to start connecting more than 15,000 schools and twenty million students over the next two years, without adding a dime to the deficit.

Apple has officially confirmed its involvement in the ConnectED initiative via a written statement to The Loop:

We are proud to join President Obama in this historic initiative to transform America’s schools. Apple has a long history in education, and we have pledged to contribute MacBooks, iPads, software and our expertise to support the ConnectED project. We look forward to announcing more details with the White House soon.

More information will be provided in the coming weeks, according to the State of the Union fact sheet.

In addition to the two existing technology hubs in Youngstown and Raleigh that connected businesses to research universities to “help America lead the world in advanced technologies”, Obama promised six more “hubs for hi-tech manufacturing,” but stopped short of elaborating further.

He also hinted at the possibility of a long-expected patent reform and promised there will be changes in how the NSA spies on people.

Tim Cook was in attendance of last year’s State of the Union when Obama mentioned that Mac production would return to the United States.