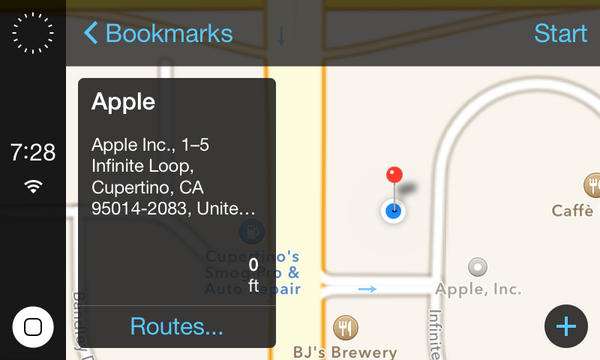 Following a set of screenshots taken from iOS in the Car, Apple’s project that strives to enhance in-car iOS functionality, app developer Steven Troughton-Smith who posted these images has now created a video that shows off the software’s various user interface aspects and functionality, running via the iOS Simulator software.

The biggest takeaways from the clip: iOS in the Car supports multiple screen resolutions to accommodate various in-car dashboard screens, in addition to hardware buttons, wheels, touchpads and of course touchscreens…

The video (via MacRumors) is based on iOS in the Car functionality present in the already released iOS 7.0.3 but not accessible by default. The interface shown off on video appears to resemble the screenshots on Apple’s website.

Troughton-Smith cautions that some of the missing functionality in the video is due to the iOS Simulator not containing all the stock iOS apps.

A couple highlights from the video’s description:

Many car makers have pledged their support for the project, including Audi, Honda, Acura and BMW. Tim Cook has called iOS in the Car a “key focus” and an “important part” of Apple’s ecosystem.

The company is expected to enable iOS in the Car functionality with the upcoming iOS 7.1 software update.

Not to be outdone by its fierce competitor, the Internet giant Google recently announced the Open Automotive Alliance initiative that wants to do for autos what Android did for smartphones and tablets.